Internet memes are ideas, cultural items or social behaviors that are shared internationally through the internet. Memes are commonly videos or images that inspire others to create a spoof of the original media.


Chuck Norris Meme Tattoo
Tough guy Chuck Norris has starred in many action films alongside notable martial arts actors such as Bruce Lee. Norris is best known for his role on the hit TV series Walker, Texas Ranger, a role that has inspired thousands of Chuck Norris jokes and comic illustrations. 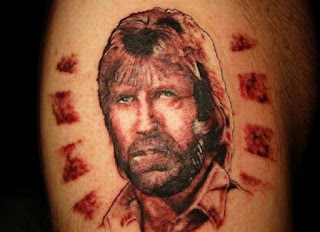 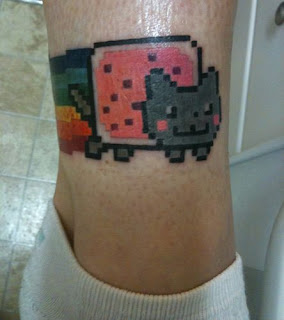 Tattoo gets Rick Rolled
"Rick Rolling" is an online prank based on misleading an internet user before showing them a video of Rick Astley's 1987 hit song Never Gonna Give You Up. 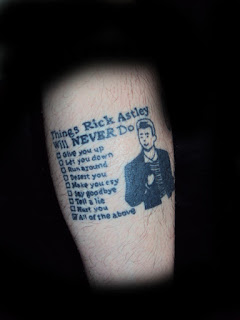 Youtube's Keyboard Cat Tattoo
Keyboard Cat is a video of a tabby cat that was filmed by his owner in the 1980s, being manipulated like a puppet to play an electronic keyboard. The video is posted on forums and included in mashup FAIL videos as a symbol of failure. 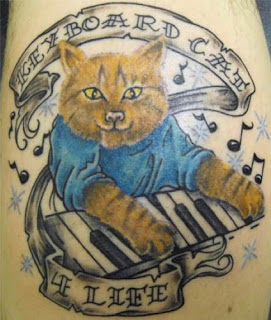 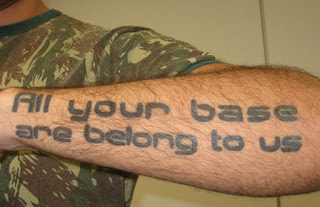 Forever Alone Online Meme Tattoo
The Forever Alone meme features a rage comic cartoon character that is used to express anger, disappointment or disallusionment. The character inspired an involuntary flash mob in 2011, in fake profiles on an internet dating website, OKCupid, were used to invite dozens of lonely single men to meet them at a certain time in Time Square, New York. The men arrived, milling around in an involuntary flash mob, presented with posters of the Forever Alone character. 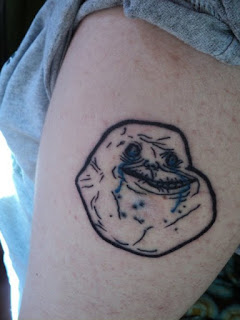 Amazing Horse Viral Youtube Video Tattoo
The viral youtube video Amazing Horse (aka Get on my Horse) is an animation that depicts the lyrics of a humorous, catchy song, in which it is insinuated that the amazing horse can fly and it's urine, lebelled horse pop, tastes like lemonade. 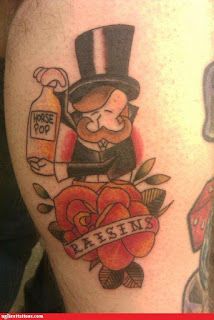 Icanhascheezburger Fridge Cat Tattoo
LOLcats and Icanhascheezburger are sites famed for their pictures of cats and other pets accompanied by funny captions. The captions are often miss-spelled, intentionally giving the animals a "cute" persona. Fridge cat is among the oldest LOLcats images, in which a cat peeks out of a fridge with the caption, "Im in ur fridge, eatin ur foodz." 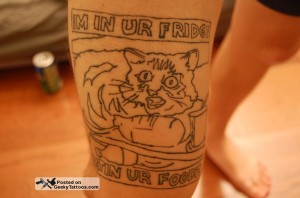 Troll Face Tattoo
The troll face cartoon is a linear sketch of the expression that a person likely wears while "trolling" the internet. The activity of trolling is when an online user actively seeks out or creates disputes on forums and discussion boards. The Troll face has become a symbol of trolling activity, and is often pasted, sticker-like, over the face of a person or character believed to be trolling. 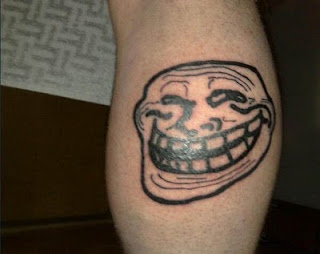 Domo Monster Internet Meme Tattoo
Domo is a Japanese designed character of a little brown monster. Domo is often Photoshopped into pictures of disasters as the "cause" of the disaster. 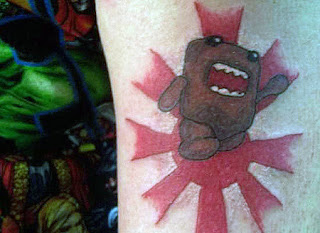