As it turns out, Waldo, Wally and Walter are the same person, making it easier for Wally Watchers to catch up with the fellow. Waldo, it seems, also has the aliases Charlie, Holger, Valli, Willy, Hetti and Effy. He uses Charlie when in France, Holger in Denmark, Walter in Germany, Valli in Iceland, Willy in Norway, Hetti in Goa and Sri Lanka and Effy in Israel. When Wally is in America, he goes by the name of Waldo.

In 1987, Martin Handford released the first Where’s Wally book in the UK. It was so popular that the character’s name was adapted for 28 countries in order to make the character more lovable to readers within that nation. So the next time you search for Wally, look out for his bulging pocket of passports.
Wally is a tall, thin character with a red and white striped shirt and hat. He wears glasses and carries a wooden walking stick. In the Where’s Wally books, the aim is to find Wally in a busy scene.

An Example of a Where’s Waldo/Wally Illustration 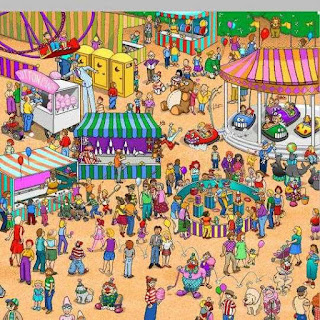 In Handford’s first two books, Wally was the only character that needed to be found. More characters were added over the years and Wally also became forgetful, which meant that there were now more characters and new objects to be found in the busy, humorous illustrations.


Odlaw
Other characters include Odlaw (which is Waldo backwards). Odlaw is Wally’s arch-nemesis and he is dressed in yellow and black. Odlaw is presumably the evil character in the book, though he is never shown doing anything particularly spiteful in the pictures.

Wanda, also called Wenda
Wanda, aka Wenda, is Wally’s friend and she is dressed in a similar fashion to Wally.


Woof
Wally’s dog Woof later became Wanda’s dog and in most illustrations, only his tail is seen. On the last page of “Where’s Waldo: The Wonder Book”, Woof is revealed in his entirety.

In 1991 an animated TV series called “Where’s Waldo?” was produced in America by DiC and CBS. The thirteen-episode series was created primarily for the American market and then translated, and Waldo’s name changed, for other countries around the world.

Intro Sequence to the US Where’s Waldo? Animated Series:

The Where’s Wally series of books have inspired many pranks. A young Canadian artist, Melanie Cole, created a 16.5m long by 5.5m wide picture of Wally and placed it on a rooftop somewhere in Vancouver. She then challenged people to find Wally via Google Earth. The project gained a huge amount of media attention and has become a favorite Google Earth search around the world.

Above: Google Earth Satellite Image of Waldo on a Rooftop, Somewhere in Vancouver.

Above: Melanie Cole at Work on Waldo for the Google Earth satellites

Above: The planning process for the Google Earth Where's Waldo art installation.

View the prank at the following link Where's Wally Prank (Don't read on until you've visited the link)
This famous online prank for Where’s Wally is a Where’s Wally scene without Wally. The viewer becomes engrossed in the image, desperately searching for Wally when a screaming face from the movie “The Exorcist” comes on screen and makes a loud noise, startling the viewer.

Two decades after the creation of the Where’s Wally/Waldo books, the challenge has not faded away. The series is still gaining popularity and is bound to be a source of interest for later generations.