Tens of thousands of human skeletons adorn the walls and ceiling of Sedlec Ossuary, a Roman Catholic chapel in a small suburb of the Czech Republic.

The Roman Catholic chapel, Sedlec Ossuary, is home to between 40,000 and 70,000 human skeletons. These skeletons have been used to decorate the church with bone chandeliers, skeletal arches and large “bells”; piles of human bones with a hollow centre. 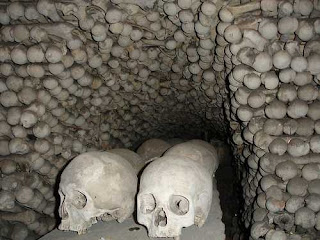 Above: Close-up of a’ bone bell’, showing the hollow which extends through the base of each bell. These bells contain the bulk of the human remains within Sedlec Ossuary. The bells sit in each corner of the ossuary, a testament to mass human suffering. 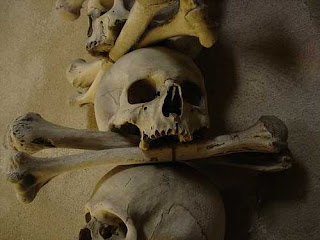 Above: Close-up of one of the many skull and cross bones within the ossuary.


The History of Sedlec Ossuary

In 1278, Abbot Henry of the Cistercian Monastery in Sedlec was sent to Palestine, considered by the Catholic Church as the Holy Land. He returned with a small amount of soil from Golgotha, which he scattered over the soil of the abbey cemetery. Because of this pious act, the graveyard soon became a popular burial ground for central Europeans. 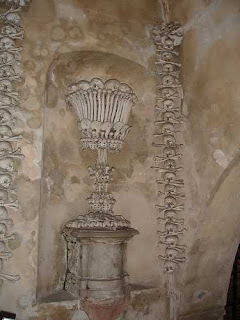 Above: A chalice made from human bones stands on a pedestal in Sedlec Ossuary, framed by skull and crossed bones motifs.

A gothic chapel was built on the grounds of the cemetery between 1282 and 1320. A large vault, or ossuary, was built to house the bones that were exhumed during the excavation process. 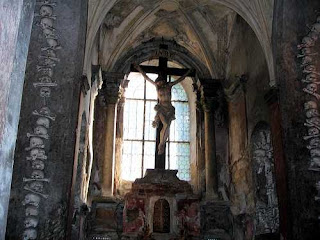 Above: A depiction of Jesus Christ on the cross is surrounded by antique bones.

In the 14th century, the black plague ravaged central Europe, leaving thousands dead. It is believed that tens of thousands of bodies found a resting place within the holy burial ground of the monastery. The chapel later suffered a massive blow after a fire burnt everything but the outer walls. 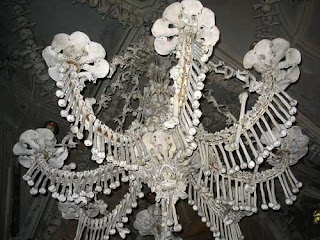 Above: It is claimed that this chandelier contains every bone in the human body and was made from several skeletons.

Construction continued for many years, with a new entrance being added and the upper chapel being rebuilt in the early 18th century.
In 1870, The Schwarzenberg family hired a woodcarver, František Rint, to organize the heaps of bones that had collected in the Sedlec ossuary. In an attempt to give the bones a sense of order, Rint created artistic, macabre creations with the bones. 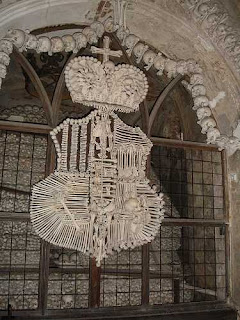 Above: The Schwarzenberg family coat of arms; created by Rint to honor his commissioners. 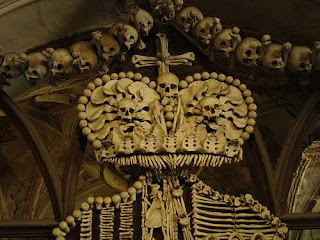 Above: Detail of the Schwarzenberg family coat of arms. 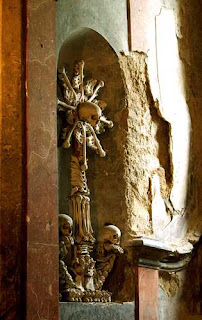 Above: Some of Rint’s creations are inexplicable. It is said that he attempted to portray the inevitability of mortality through his work. 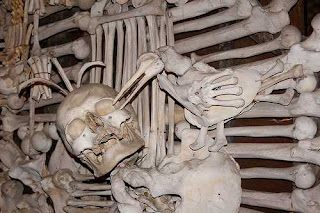 Above: Rint’s creativity is apparent in this creation in which he has used a cracked human bone to create the bird’s head.


Sedlec Ossuary in the 21st Century

The Church of Bone, situated an hour’s travel outside Prague in the Czech Republic, in the province of Kutna Hora, is a popular tourist attraction that is listed in many tour guides. 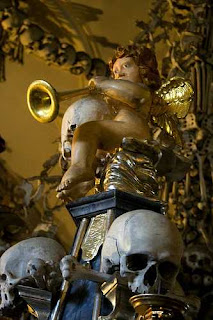 Above: A statue of a cherub, a Christian figure of a baby angel, sits on top of an unlikely pedestal in the church of bone.

The ossuary has been featured on “Ripley”s Believe It Or Not’, and was used as a location for the Dungeons and Dragons movie. Ewan McGregor and Charlie Boorman visited the church in their documentary, “Long Way Round”.

Click here for a 360° view of the Sedlec Ossuary.