Banksy is a British artist who is infamous for his striking graffiti artworks. His graffiti often has a deeper meaning, expressing Banksy's socio-political views in a powerfully public medium; street art. Banksy graffiti has become so popular that it is now a popular subject in tattoo designs.

Banksy's Girl with Butterflies Tattoo
One of Banksy's most popular graffiti art works is the image of a young girl in a dress holding a gun to her head. A swarm of butterflies is scattered across the design as though they have exploded from the girl's head. Banksy uses stencils to create his street art, which gives his images clarity and a strong silhouette. These design aspects translate well into tattoo designs; giving the tattoo an instant appeal. 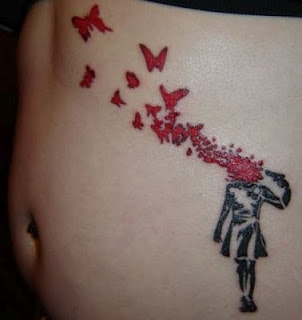 Above: The red butterflies stand in stark contrast to the solid black areas used to create the girl. Like all of Banksy's graffiti designs, the girl blowing butterflies combines aspects of human nature such as hope, violence, beauty and death. [source]

Banksy's Girl with a Heart Balloon
Banksy often carries a theme through a series of images, expressing the same idea in a number of ways. Like Banksy's girl with butterflies graffiti piece, his girl with a heart balloon design incorporates aspects of humanity such as innocence, hope and loss. 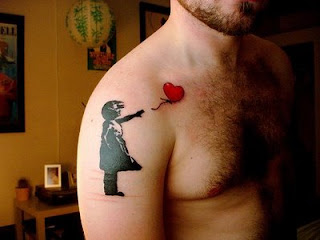 Above: Another of Banksy's graffiti art works that uses black and red as the color scheme. The simplicity of the design and the innocent nature of the subject make Banksy's girl with a heart balloon a popular graffiti tattoo design choice. [source]

Banksy's Man throwing Flowers Tattoo
This Banksy graffiti piece of a man throwing flowers has become an internationally renowned art work. The stencilled graffiti shows a man with a scarf covering his mouth, poised to throw a bunch of flowers. Exposure to news networks means that the brain expects a man in this pose to be holding an object of violence such as a petrol bomb. Instead, Banksy has chosen to have the man throw a bunch of flowers - an object that is generally associated with peace and beauty. 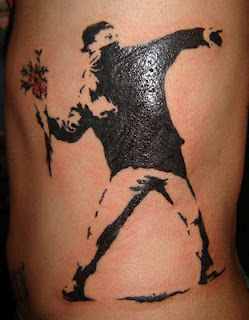 Above: Banksy's powerful graffiti art work makes an equally powerful statement when tattooed onto skin. The large area of solid black ink adds drama to the graffiti tattoo while balancing out the detailed delicacy of the flowers. [source]

Tattoo of Banksy's Rat Painting a Heart
Rats are a recurring theme in Banksy's graffiti art. While most people view rats with disgust, Banksy has chosen to humanize rats by giving them human characteristics. In his popular graffiti piece of a rat painting a heart, Banksy has personified the rat by putting it in a human situation (showing it wielding a paintbrush), and insinuating that the rat has human emotions such as hope and yearning (expressed by the use of a heart as the subject matter of the rat's painting).

Above: The dark area on top of the rat's head is reminiscent of a beret, a hat that has often been worn by French bohemian artists. Whether this was intentional or not, the effect remains the same; adding yet more humanity to a creature that is often reviled by humans. [source] 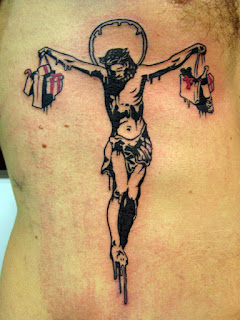 Above: Banksy's designs often seem both well thought out and spontaneous in their construction. In his graffiti art work of Jesus Christ Christmas shopping, the degradation of religion through materialism is expressed in the way that the design appears to be melting. This may have been a spontaneous addition to the design to drive the message home. [source]

With their strong lines and powerful meanings, Banksy's graffiti art works translate easily into tattoos designs. Banksy has done more than any other modern artist to inspire curiosity and criticism in the younger generation, and is the first graffiti artist to have won such international acclaim.