The word 'lolcat' is created from the abbreviation 'lol' and 'cat', and is used as a label for any funny photograph of a cat. Often the photo is captioned with 'lolspeak', a misspelled language that was formed during the rise in popularity of lolcat pictures.

A Kitteh Historeh of lolcats
In the 1870s a British photographer called Harry Pointer created a series of photographs of cats. To add to the humor of the cat pictures Pointer would often add a funny caption, and thus the first lolcat pictures were born. Soon other photographers were using cats and other animals as subjects in photographs, often dressing the animals in human clothing and personifying them by posing them in human situations. Harry Whittier Frees is another notable antique lolcat photographer who created dozens of animal pictures that were a parody of human life. 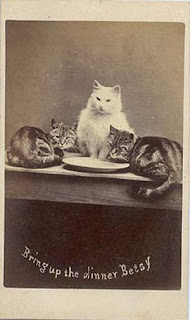 Above: Antique lolcat photograph by Harry Pointer, with the caption "Bring up the dinner Betsy" [source] 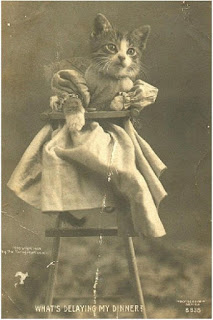 Above: An antique lolcat postcard from 1905. The photograph was taken by Harry Whittier Frees, who added the caption "What's delaying my dinner?" In modern lolspeak, the caption would probably be along the lines of the classic; "I can has cheezburger?" [source]

Postcards of pets in costumes with captions were a novel concept in the early 20th century and became a popular way to communicate with loved ones who lived far away, as postcards included a picture and were cheaper to send than letters. Often the lolcat postcards were sent in place of birthday cards, to the delight of the children who received them. Even a century ago, lolcats were a popular form of humor.

Makin da Kittehs seem Hooman
Anthropomorphism is the act of giving animals or objects human characteristics and personalities. Harry Whittier Frees was a master of anthropomorphism who didn't just pose his animal subjects in human situations, but waited for a seemingly human expression to pass across the animals' faces before he took a photograph. Often the facial expressions were ones of resignation or exhaustion as it must have been tiring for the animals to sit for the camera in uncomfortable positions for what could be hours. 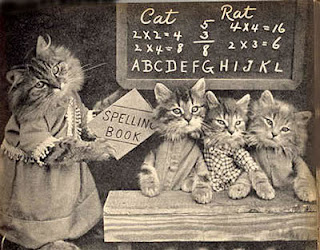 Above: A Frees photograph of a feline teacher and her pupils. Lolspeak hadn't yet been invented, so antique lolcat photographs often implied that cats were as intelligent as humans. If this were a modern lolcat picture, the alphabet would probably be jumbled and the title of the teachers book would be something along the lines of "spalling book". [source] 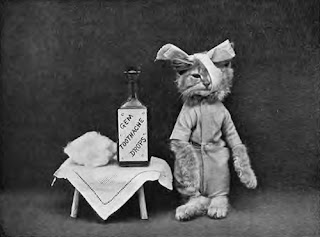 Lolcats as an Antique Art Form
Before the art of photography was created, humorous pictures were either painted or illustrated. A notable cat illustrator of the late 19th century was Louis Wain. Wain's drawings of cats in human situations captured the imaginations of the people at the time and were published in newspapers as a form of entertainment. 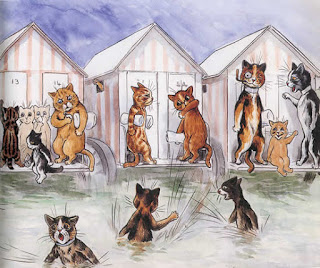 Above: Like the lolcat photographers of the time, Wain chose to pose his feline subjects in human situations, personifying them with human emotions such as humor, frustration and surprise. [source] 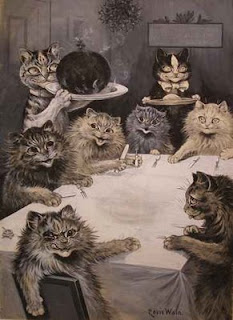 Although websites like lolcats.com and icanhascheezburger.com are modern inventions, the art of funny cat pictures has existed for over a century. Over time lolcats have been given their own language and their own attitude toward life.