The Smurfs first appeared in 1958 in a series of illustrated comic strips by the Belgian cartoonist Peyo (Pierre Culliford). The characters then went on to stardom in the Hanna-Barbera children's television cartoon, The Smurfs. 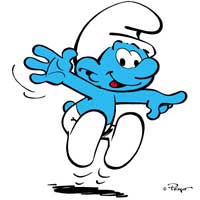 Smurfs appear regularly in graffiti murals around the world, and no wonder - these blue skinned fictional characters have been around for more than half a century. IGN dubbed The Smurfs "kiddie coacaine" for people growing up in the 80s. Though considered antiques in the comic world, The Smurfs are still gaining popularity with cartoon consumers and artists.


Smurfs are named according to their emotional traits or professions, for example; Brainy Smurf or Painter Smurf. I suppose this one could be called Ghetto Smurf: 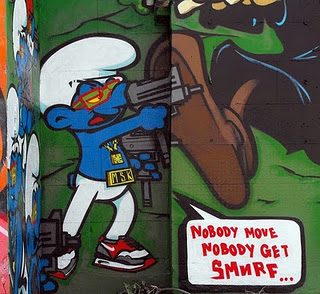 Above: The Smurf language replaces most verbs and nouns with the word "Smurf". 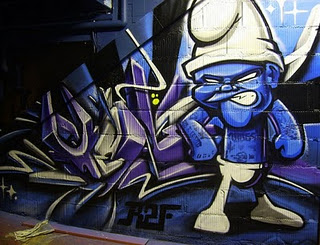 Above: Tattoo Smurf depicted in a popular graffiti style. 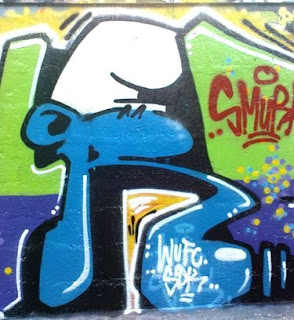 Above: These blue fictional characters are very adventurous, finding their way into a variety of street art shapes and styles.

Even when depicted in a stylized fashion, Smurfs are recognizable. So recognizable, in fact, that even as a silhouette graffiti piece, there's no doubt that this is a smurf: 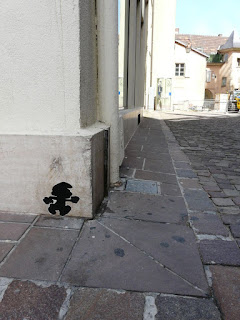 For many years, Smurfette was the only girl Smurf in the village - that is, until Sassette came along. 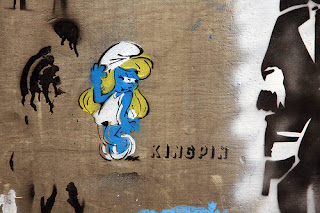 Above: Smurfette wasn't one of the original Smurfs as she was created by Gargamel to be an evil Smurf. Originally, Smurfette's hair was black, but after she became a good smurf, her hair turned blonde. 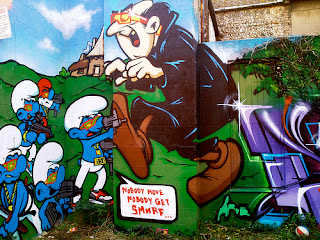 Above: Gargamel the wizard is the antagonist of the series. This somewhat dim-witted baddie creates diabolical plots to capture Smurfs to fulfill one of his dastardly schemes. 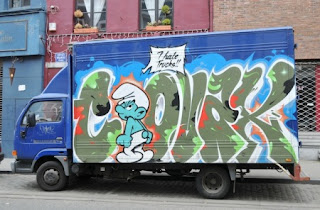 Smurf: In true Smurf language, this would have been "I Smurf trucks!"