Graffiti art is often an expressive, albeit illegal, way for street artists to express their opinions on social and political affairs. However, sometimes graffiti artist create fan art of celebrities, movies or computer games. This street fan art is simply a way of expressing appreciation for characters that have become a part of the artist's life. 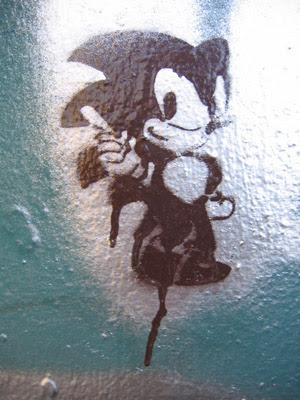 Classic arcade games like Tetris, Space Invaders and Pacman have memorable, pixellated characters or objects that frequently find their way into graffiti fan art. The pixels can be created out of paint, tiles or painted squares of materials such as cardboard or wood.

Above: This gaming graffiti piece uses craft mosaic tiles to create a pixellated image of the alien characters from the arcade game, Space Invaders.

Besides arcade games, there are a number of classic computer games that have found their way into street artworks. Mario Brothers, The Legend of Zelda, Lemmings and Worms were a staple diet for gamers back in the late 80s and 90s. With the advent of gaming consoles, gamers could play their favorite games from the comfort of their own homes instead of going out to an arcade. 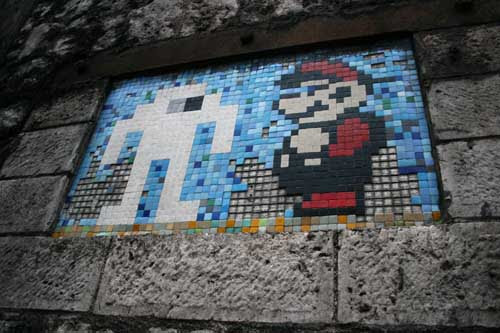 Above: This tile mosaic shows Mario from the popular Nintendo game, Mario Brothers, in a classic, pixellated style. 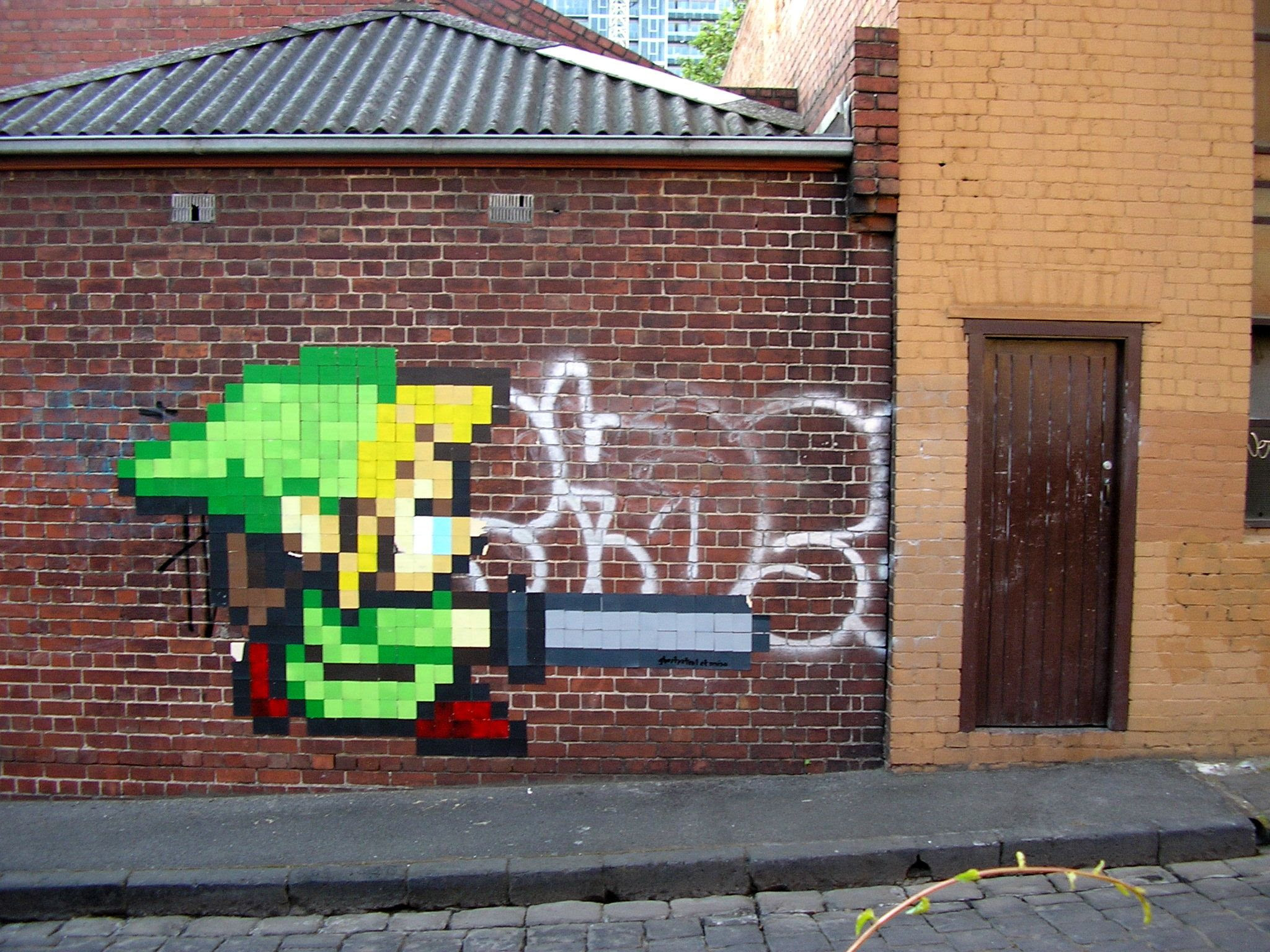 Above: This piece of street art uses beer coasters to create a pixel image of Link from the Legend of Zelda. 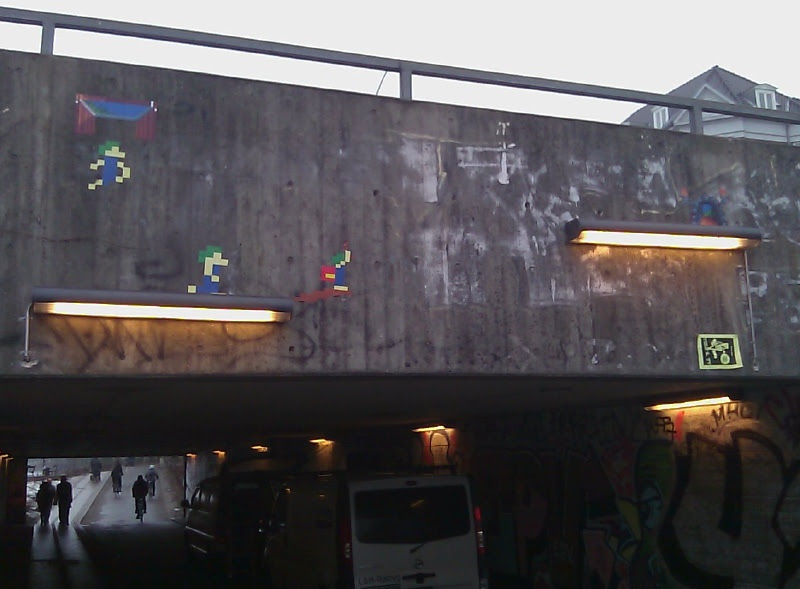 Above: Lemmings painted on a bridge over a busy road way. Several lemming graffiti pieces have popped up around the world, usually on bridges over freeways and highways. The artworks are often accompanied by the phrase, "Hello Lemmings!" 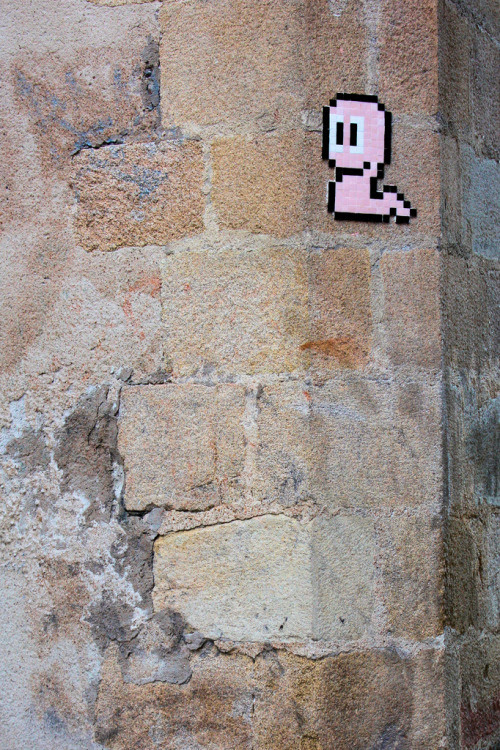 Above: A classic Worms character greets pedestrians from a street corner. The game's graphics changed drastically with the introduction of Worms 3D.

The current gaming industry focuses heavily on graphics. Computer games and console games now have highly detailed scenes and characters that present new challenges for game playing graffiti artists. Spray paint, however, can create a smooth, 3D effect when used by a skilled graffiti artist. Luckily there are many games that use a cartoon style for their characters, making a graffiti rendering of the characters easier for street artists. 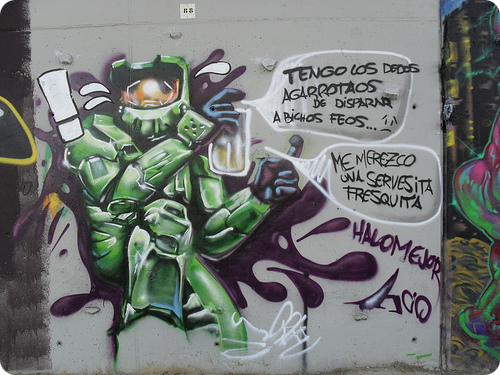 Above: Commissioned graffiti depicting an artist's interpretation of a Halo character.

Above: The Sony Corporation commissioned several graffiti artworks to advertise their new product, the PSP. The googly-eyed cartoon characters are each holding a PSP.

Above: A spray-painted 22nd Century vehicle from the game R-Type