The Mummies Museum, El Museo De Las Momias, in Guanajato, Mexico, is home to over 100 hundred human mummies. The mummification was "accidental"; the bodies were not embalmed before death, but were mummified naturally after burial. 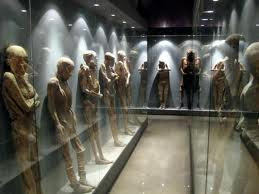 Above: The bodies in the Mummies Museum are displayed behind glass, creating an environment that helps to preserve the integrity of the human remains. As you can see in the picture above, many of the mummies are displayed in a standing position, creating an eerie effect for visitors. [source]


Mexico's Cholera Epidemic
In 1833, Mexico suffered a cholera epidemic. Thousands of Mexican men, women and children fell victim to the plague. The law at the time stated that a grave tax had to be paid by the family of the deceased. If the grave tax was not paid, the human remains would be disinterred; dug up and stored, until the tax had been paid.
For the deceased who had no living relatives to pay the grave tax, this meant that between the years of 1865 and 1958, their bodies were exhumed and stored by the government. It was discovered that soil conditions and a dry climate in the area had naturally mummified many of the human corpses. In the early 1900s, these bodies became a tourist attraction, and cemetery workers began charging tourists an entrance fee to view the bodies. Many of the bodies have been reduced to little more than skin and bone, yet many of them still have facial features and expressions and even clothing, as the mummification process occurred before disintegration could begin. 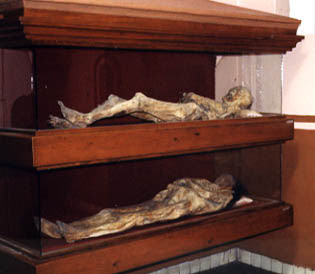 Above: Some of the mummies are displayed in glass coffins, which keep the bodies dry and allow visitors to view the mummified remains. The bodies have not rotted under the ground. Instead they have dried out and become mummified. [source] 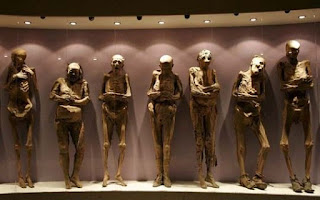 Above: The mummies are frozen in the position that they were buried in. Bent limbs mean the body slid around inside the coffin before burial. After being dug up by the Mexican government, the mummies were stored in warehouses while the government waited for burial taxes to be paid. The bodies that are displayed in El Museo De Las Momias are mummies who have no relatives to pay the grave tax for them. [source]

Buried Alive
Several of the mummies on display bear evidence of being buried alive. There were so many bodies to bury during the cholera epidemic that several sick and dying people were buried before they had died. Their faces have frozen, post-mortem, into a rictus of agony and despair. Some of those who were buried alive covered their faces with their arms, and others bear scratch marks on their bodies, caused by their struggle to escape their graves. These mummies create a macabre and creepy display. 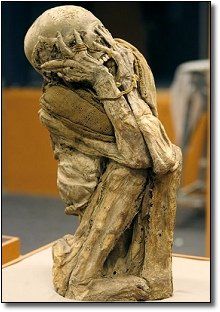 Above: This mummy shows evidence of being buried alive. Having woken up in a mass grave, this person curled into a ball, covering their face with their hands. The mummy appears to be screaming or crying, an effect caused by the skin of the lips pulling away from the mouth as it dries. [source]


Mummified by Mistake
Not all of the corpses were caused by the cholera outbreak. Ignacia Aguilar suffered from a heart condition that caused her heart to stop for several hours at a time. One infliction of her condition caused her heart to stop for longer than usual. Presuming her to be dead, her family had her buried. After being disinterred, her body was found to be positioned in an unusual way. Aguilar had raised her arm to her face and had bitten into the flesh of her wrist. There was blood in her mouth and scratch marks on her forehead. It has been presumed that upon discovering herself buried alive and trapped, Ignacia Aguilar attempted to commit suicide. 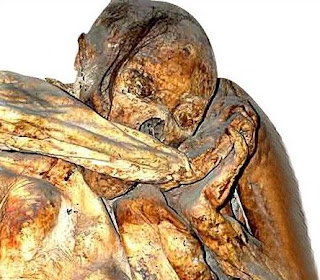 Above: Ignacia Aguilar, one of the most famous of the Museo De Las Momias mummies. This photo shows how Ignacia tried to commit suicide by biting into her wrists. [source]

Child Mummies
Mummies of children are rare, as most embalmed mummies are adults. El Museo De Las Momias houses a number of child mummies who were mummified naturally. Many of the child mummies still have their burial dress on, and while some appear to be peacefully at rest, others seem to despair at their state of mummification. 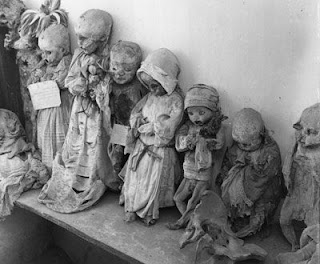 Above: A collection of child mummies at El Museo De Las Momias. These creepy displays attract thousands of visitors each year. [source] 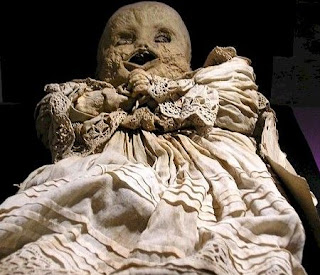 Above: This mummified baby looks like a macabre doll. This infant mummy is part of a display that makes up the world's largets collection of child and infant mummies. [source]

Although only 2% of the exhumed corpses had undergone mummification, the Accidental Mummies of Guanajuato is still one of the largest exhibitions of natural mummification in the world. These mummies can be viewed at the Mummies Museum, El Museo De Las Momias, in Guanjuato, Mexico.

If you find these petrified people fascinating or just plain creepy, there's more skeletons in the closet in the article: Sedlec Ossuary: The Gothic Church of Human Bone