Leonardo da Vinci’s Mona Lisa painting is famed for having eyes that follow you around the room. The principles used in da Vinci’s paintings can also be applied to sculpture or paper-folding to create a hollow face illusion.


These videos show a variety of hollow face illusions at work. As the camera operators move around the sculptures, the faces (sometimes just the eyes) turn to watch the viewer.


This sculpture is an artist’s rendition of St Francis. Though small, the bust of St Francis is an interesting piece, as no matter where you are in the room, St Francis has his eyes on you.


Even when rendered in 3D animation software, the hollow face illusion still has an essence of magic. The eye is tricked into believing that the heads are turning as the 3D model rotates.

Hollow face illusions are exactly what their name implies. The artist sculpts, carves or in the case of paper or origami art, folds the material to form a “hollow” face. The human eye is trained to see a face as being convex (bulging towards the viewer), that it naturally mistakes a concave face (bulging away from the viewer) as being convex. Small sculptures can be rotated horizontally and vertically to create the impression that the head displayed is turning from side to side or up and down. For large sculptures, the viewer can move around the sculpture, marveling at the supposed manner in which the face turns to follow the viewer around the room.


The theories used in hollow face illusions and by da Vinci for the “Mona Lisa” are similar, but not exactly the same. Instead of creating a hollow face for Mona, da Vinci used perspective, contrast, shadows and shape to create the illusion that the Mona Lisa’s eyes turn to follow the viewer around the room. Da Vinci created a sketch called Proportions of the Face, which he used as a base for the proportions of the Mona Lisa’s face. The proportions created by da Vinci are based on the same mathematical principles as hollow face illusions, and create a similar effect. 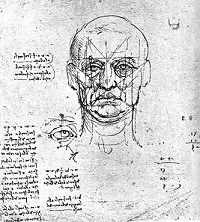 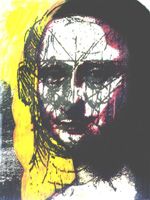 Above are the working stages of the Mona Lisa painting, showing how da Vinci incorporated his sketch, Proportions of the Face, into the final Mona Lisa masterpiece. The reason why Mona Lisa's eyes seem to follow you around the room is a combination of light and shadows in the piece and layers upon layer of paint that give the painting a slight 3-Dimensional effect.