Steampunk is a sub-genre of science fiction and fantasy that combines the steam-powered gadgets and inventions of the Victorian era with science fiction concepts such as time travel and space travel.

History of the Electric Guitar

The electric guitar was first designed and produced in the 1930s by Adolph Rickenbacker. Since then, the stringed instrument has gained popularity for the variety of effects that it can produce. It has become a staple in the music recording industry and has gained popularity as a hobby for music enthusiasts. Electric guitars generally have a solid-bodied design, unlike acoustic and classical guitars which rely on a hollow body to create a resonant sound.

Because the shape of an electric guitar’s body doesn’t affect the sound of the guitar, electric guitar bodies can be built in whatever shape the musician wishes it to be. Additions to the body for decoration also don’t affect the sound of the instrument, as long as this decor doesn’t inhibit the musician’s movements. Steampunk designs use a lot of copper, brass, machine parts, glass tubes, dials and switches. These design elements can be worked into the guitar to create a symbiotic relationship between the modern electric guitar and Victorian inventions. The result is a modern instrument with a classic late 19th century feel to it. 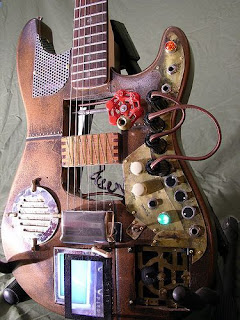 Steampunk art is based on a few basic principles, but there is no definitive style. Elements such as clockwork, steam power and magic all find their way into steampunk designs, and now it seems the style has found its way into modern music.