As a sub-genre of science fiction and fantasy, steampunk has clattered and ground its way into current technological designs. Incorporating the steam-driven and clockwork-powered inventions of the late 19th century into current gadgets and devices, artists and designers are using steampunk styles to give modern technological tools an old-world feel.

Also known as thumb drives, these nifty mass storage devices are pocket-sized and portable. Though the purpose of the device is to perform a modern function; the transportation of information, there’s no reason why the design of the USB shouldn’t look like it has teleported from an alternate reality. Victorian-era design elements that are used in steampunk designs include clockwork parts and metals such as copper or bronze. 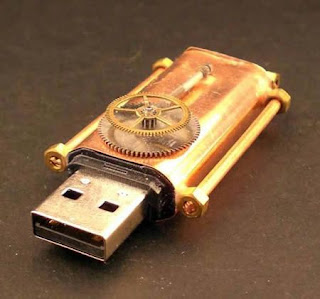 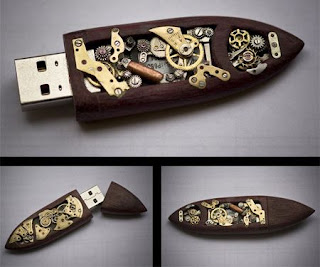 Above: 16GB Mechanical Memory Key from Artype, using clockwork parts from six pocket watches. When in use, the drive glows green from below, giving the parts a sense of movement. 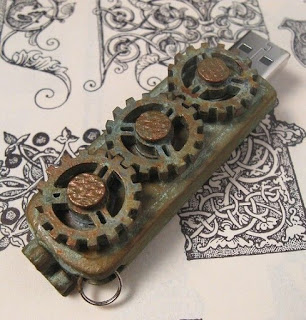 Above: 16GB Copper and Patina Steampunk Flash Drive from cerriousdesign. The three gears move when the drive is connected.

A computer mouse is typically made with modern materials such as plastic and rubber. By using Victorian-era elements of woods and metals, these designers have transformed this computer device to look like a 19th century antique.

Above: Steampunk Furnace Mouse by Unklian. The buttons are made from shaped copper, and a steam furnace effect is created with an orange LED inside the casing. 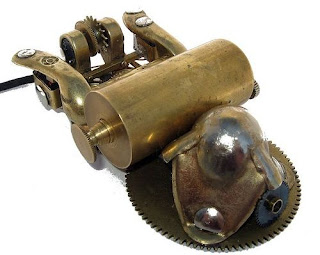 Above: The Bug, Steampunk Computer Mouse created by Jake Hildebrandt, for his steampunk computer The Telecalculograph. 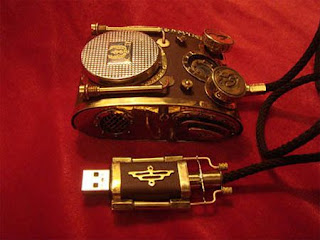 Above: Steampunk mouse from Modding Russia. Intricate designs on the metal and a rope casing for the cord create a truly authentic feel for this piece. 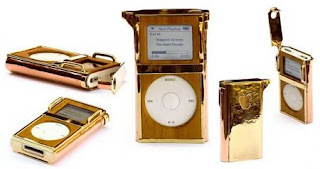 
Above: Hewlett Packard ZT1000 laptop casing by Datamancer. The laptop is turned on and off with an antique clock-winding key and boasts clawed feet and antique-styled copper keyboard and mouse. 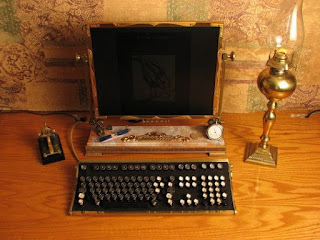 Above: Dell 1907FP Flat Panel Monitor and keyboard steampunk mod by The Steampunk Workshop. The screen uses chime levers from a grandfather clock as screen controls. 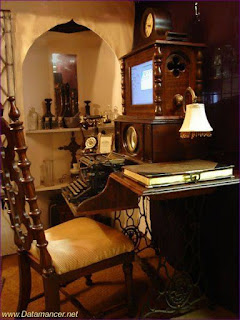 Above: The Nagy Magical-Movable-Type-Pixello-Dynamotronic Computational Engine by Datamancer. This elaborate design uses a typewriter, clock and a carved wooden stand complete with lamps to create steampunk style.