Photoshop artists can create hybrid creatures out of anything. The following images show how digital artists have combined man-made technological creations with animals created by mother nature. The results are mechanical animals.

Photoshop VW Buggy: An Insect Car
Volkswagen's popular family car, the VW Beetle, has been spoofed in this Photoshopped machine animal hybrid. The artist has combined the original shape of the VW Beetle with the colors and accessories of an actual, living insect, creating a visual pun. 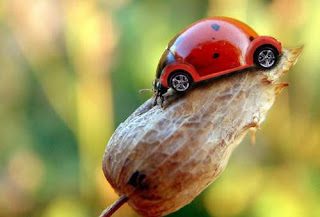 Above: Instead of legs, the lady bug now has wheels. The carapace above the beetle's head forms the windshield of the insect car. This Photoshop artist has created a visual pun on the name of both the VW Beetle and the Lady Beetle.
[source]

The Photoshop Toad Engine Croaks when Cranked
In this machine animal hybrid, the Photoshop artist has shown the "hood" of the toad vehicle (it's skull) as being open, revealing the frog's brain engine within. This robot creature combines organic elements, such as its skin, with machine components, such as having headlights for eyes. 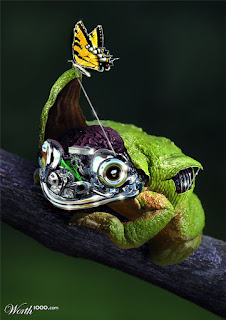 Above: The Photoshop techno toad and it's cyborg butterfly mechanic. [source]

The Robo Lobster's a Crustacean with Cogs
To eat this robot lobster, you'd need to suffer from Pica, a mental illness that compels people to eat inedible objects. Though it is prone to rusting, the Photoshop machine lobster lives in harmony with its watery surroundings, dining on the metal hulls of sunken ships. 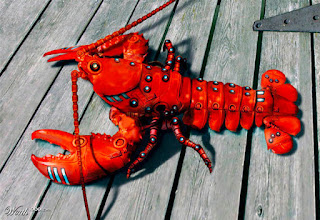 Above: The robo lobster's vice-like claws deliver quite a pinch. [source]

Gone Fishing in Photoshop
This Photoshop artist has combined an aquatic animal; a simple fish, with a submarine to create an organic underwater vessel. Unlike regular submarines, the Photoshop fish sub uses fins to propel itself. 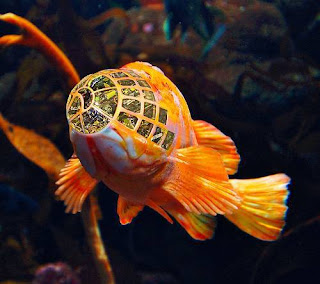 Above: The colorful Photoshop fish sub, complete with a glass engine room for tiny mariners to see out of. [source]

Photoshop Chicken Machine Clucks and Clanks
The Photoshop robot chicken ain't no turkey, and is hoping to be featured in the next Transformers movie . While this rooster alarm clock may be able to play your favorite songs, it's not going to produce any eggs for breakfast. 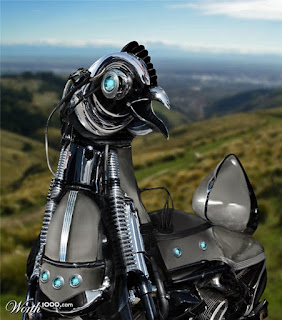 Above: The Photoshop chicken gives new meaning to the term "battery hen". [source]

Fly me to the Moon on a Hornet Motorbike
Tired of people driving close to your back bumper? You'll never need to worry about that if you're riding the Photoshop hornet bike. With its mean-looking features and nasty stinger, this buzzing motorbike will give you plenty of room on the roads, and if traffic is bad - it can fly you to work. 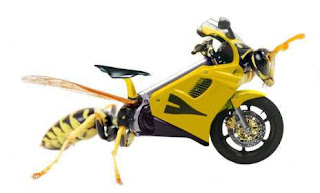 Above: Even as a Photoshop concept, the wasp motorbike is awesome. [source]