During the Victorian era, many new time-saving devices were designed to run on the brand-new energy source; electricity. For the first time, the world had electrical home appliances that performed menial chores faster and more efficiently than before.

The Electric Toaster, the Best Thing since Sliced Bread
Bread has been a staple food in many cultures for centuries. It is dipped in soups or used to create sandwiches. It can be crumbed, fried or used to soak up other foods such as gravy or sauces. One of the most popular ways to eat bread is to toast it and serve it with butter, jam or eggs. In the pre-electrical world, toast was created by cutting a slice of bread from the loaf and suspending it over coals or before an open flame. Although a number of toasting utensils were created, toasting bread was a fairly tricky affair that often resulted in burnt bread or singed fingers.
Early electrical toaster designs included a heating coil that gave bread an appealingly even toasting. Although this may sound safer than an open flame, antique toasters were fairly dangerous. Because there was no timing mechanism the machine wouldn't switch off without human intervention, leading to a number of small fires caused by forgotten toasters. 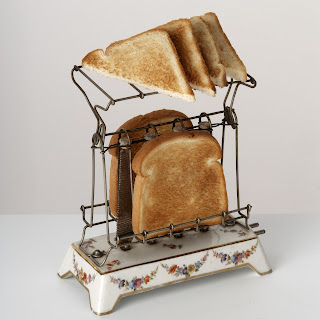 Above: An antique electrical toaster that was in circulation around 1910, consisting of electrical heating coils surrounded by wire baskets for holding the bread. To use this toaster, a person would have to turn the bread slices by hand. [source]

The Electric Kettle, a Boiling Point in History
Hot water has played a role in human development since time immemorial. It is used for cooking, bathing, cleaning and in the preparation of a number of products. Applying heat to water is an act that is performed countless times every day, all over the world. In our modern era, the task of boiling water is as simple as filling the kettle and flicking a switch.
Boiling water wasn't always as easy as it is today. The first electrical kettles were created in the 1890s and contained a heating element in a compartment below the kettle, meaning that huge amounts of energy were wasted in the boiling process. The first electric kettles weren't insulated and could become hot enough to burn, eliciting painful gasps from those unlucky enough to brush against it. Antique electrical kettles, like early electrical toasters, didn't switch themselves off and would boil dry without supervision. 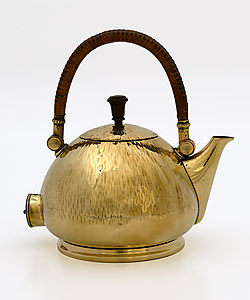 Above: An electric kettle, designed by Peter Behrens in 1910. This model contained a solid heating element that slides out for replacement. [source]

The Domestic History of the Electric Washing Machine
At the same time that electric kettles and electric toasters were being introduced into households, other time-saving devices were being invented. One advancement that must have caused sighs of relief for domestic workers was the electric washing machine. Before the creation of the mechanized washing process, clothing and linens were often washed by hand, either in a river or a drum of water. Those that weren't washed by hand were placed in a drum that was then turned with a handle, a tiring and time-consuming job.
The first electric washing machine was named The Thor, and was invented in 1908 by the Hurley Machine Company of Chicago. The Thor was an incredibly dangerous piece of machinery. The electric motor was situated under the open drum of water, which meant that spills often led to electrical shocks. Because the moving parts were not covered, clothing, fingers and hair could get caught in the machine. Despite the dangers, women of the age cooed with delight at The Thor, as the electric washing machine was one of the first devices that made mundane domestic chores easier. 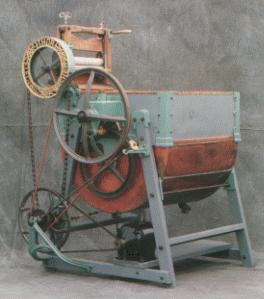 Above: The Thor washing machine. The machine is reputed to have been so dangerous that it could scalp a person if their hair got caught in the moving parts. [source]

The History of the Iron is a Wrinkle in Time
In order to remove wrinkles from clothing and bedding, domestic workers of the 19th century would use a flatiron. This was an arrow-shaped piece of metal with a handle which was placed on hot coals or in a fire to heat, wiped to remove carbon from the metal surface and then quickly pressed against the cloth to press out wrinkles. These irons could easily ruin expensive garments or scorch the hands of the user. Because it took so long for an iron to heat up, a laundress would often have two or three irons on the go; heating irons as she worked the cloth with another iron.
The first electric iron was patented in 1882 by Henry W. Seely. He called it the "electric flatiron". It was an invention that would seem cumbersome and crude by modern standards as it took a long time to heat up, had no variable heat settings and no way to steam cloth. Essentially, it was a chunk of metal that heated up and continued to get hotter and hotter until it eventually it burned either an item of clothing or a flustered laundress. 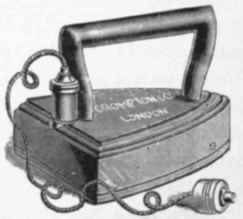 Above: The Seely Electric Flatiron contained no insulation on the handle, which needed to be gripped with a thick cloth to prevent the laundress from burning her hands. Like all Victorian era appliances, the Seely iron was a cause for many small (and probably a few large) fires. [source]

Many electrical appliances that we take for granted these days, such as kettles, washing machines and toasters would have been a baffling marvel of engineering and technology just a century ago.