Sam Spratt has PAINTED ALL THE MEMES!

Sam Spratt's website describes his work as having "sprattitude". This fine arts graduate combines classical training with current ideas, many of which stem from online media and internet memes.

PAINT ALL THE MEMES!
Spratt's collection of paintings entitled Illustrated Internet is based on what he calls the visual vernacular of the internet. These paintings are based on popular internet media characters found in rage comics. Most of these characters are used online in their original form; simple black and white sketches of an expressive cartoon face. Spratt has fleshed out these characters by giving them a 3-dimensional existence. 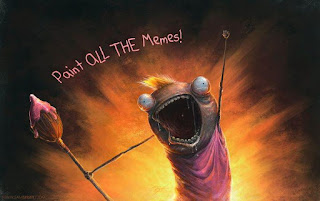 Above: "Paint all the memes!" based on "X all the Y". This character has been used as a template for expressing a fanatical point of view. Notable variations are "Clean all the things!" and "Eat all the brains!" [source] 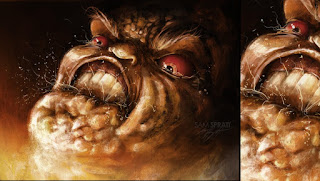 Above: The rage comics fffuuu face. The painting of the meme character is complete with flying spittle and red eyes. [source] 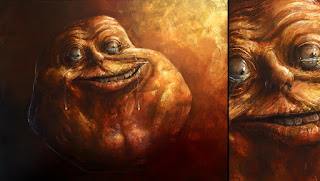 Above: An expressive painting of the meme Forever Alone. [source]

Paintings of Memes
Although there are thousands of fan art works of internet memes, Spratt's paintings are original in that he has removed the characters from their ordinarily 2-dimensional state and given them a fleshy substance. Although each of the faces still stands alone, bereft of a body, the characters are complete.
Sam Spratt's art style uses a combination of messy brushwork and careful lighting to create the overall effect of a character suspended in endless space. 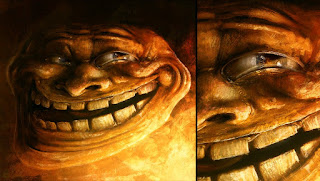 Above: Trollface in 3D. The troll face rage comics character is used to express delight or humor at someone else's misfortune, and is often used in forums, comics and .gif animations. [source] See more trollface fan art works. 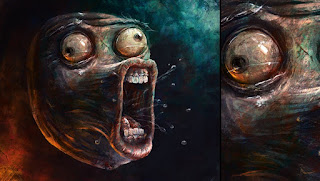 Above: LOL face. Rumor has it that the original lolface appeared in Garfield Christmas 1987. [source] 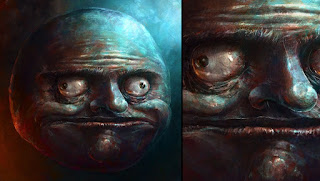 Above: Me Gusta. The rage comics character is used to express a sickening enjoyment of disturbing media. [source]