Trollface gets Immortalized in Art

The Trollface (or Troll Face) character has its origins in a comic created by Deviant Art user Whynne in 2008. The original comic was intended to express how pointless trolling on 4chan was. Since its creation, the Trollface character has become an online meme, popping up in thousands of rage comics and fan art works.

Mona Lisa Troll Face
Leonardo da Vinci's famous painting, the Mona Lisa, is a popular subject for character hybrids and parody art. In the picture below, the Mona Lisa gets trolled by the infamous meme, Trollface. Ordinarily Troll face is depicted in black and white, but the artist has used color in this Photoshop face swap to blend the two characters into one subject, the Trolla Lisa. 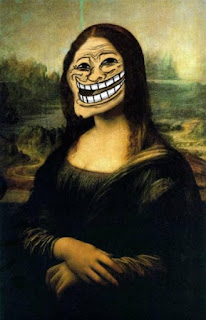 The Fine Art of Trolling
Artist Sam Spratt has PAINTED ALL THE MEMES! This fine arts graduate has created a series of paintings of internet memes and posted them online. One of the most appreciated paintings in the collections is the painting of Trollface. The character has been fleshed out, complete with wrinkles, shiny eyeballs and the hint of a tongue. This is most likely what Troll face would look like if he were real. 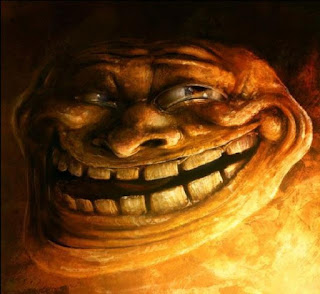 Above: Sam Spratt's artistic interpretation of Trollface shows the rage comics character as he would appear if he were made of flesh and blood. [source]

Trollface gives a Load of Lip
A photographed body art version of the famous meme, Troll face. The appeal of this photograph is that it doesn't use photo manipulation. Instead, this girl has used body paint to transform her own grin into that of Trollface. 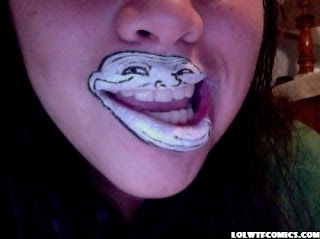 Above: Troll face gets lippy in this meme body art design. [source]

Trollface in his Troll Cave
In this meme fan art work, Troll face is depicted in his cave, trolling the internet with his troll laptop. The Trollface character is used on forums, in cartoons and in .gif animations to show that someone has been trolled, and is often added into videos at the moment where someone messes up. 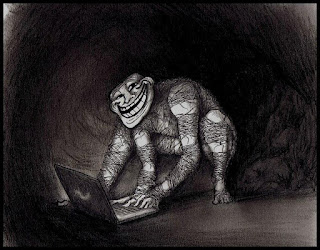 Get Troll Faced on Halloween
Artist Psycho-Stress creates masks of popular memes, such as trollface, Me Gusta and Forever Alone for Halloween. The white plastic and black paint mimic the design of the original black and white Trollface sketch. 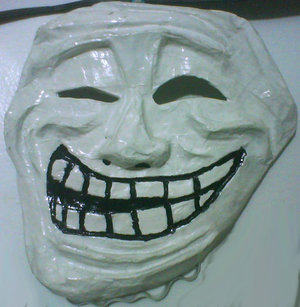 Above: Halloween gets troll faced with this internet meme fan art mask. [source] 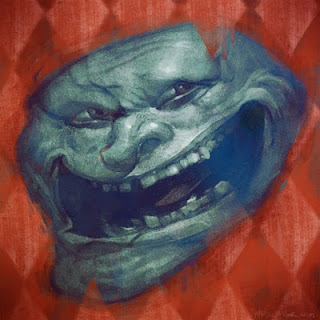 Photo Manipulated into Troll Face
For this artist, evolution was not happening fast enough, so he used Photoshop to turn this guy's face into a real life Trollface. For a bit of fun he's added a top hat, monocle and a pipe to create a steampunk affect. 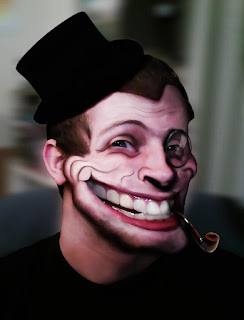 Above: A Photoshop image manipulation depicting Trollface as a real human being. [source]