Adolf Hitler was the failed leader of the German Nazi Political Party during World War 2. During the war, Hitler's forces killed millions of civilians including gypsies, homosexuals and Jews. After finally being defeated in 1945, Hitler and his wife, Eva Braun, committed suicide. 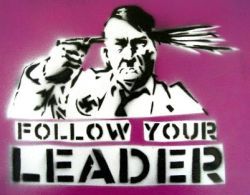 Hitler is remembered for the atrocities committed by the Nazi Party while it was under his reign. With his slick lock of black hair, piercing eyes and tiny mustache, Hitler is a recognizable figure. Though it has been more than half a century since his death, images of Hitler still appear in modern art, as he has become an easily recognizable symbol for evil. 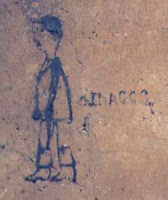 Above: Graffiti dating back to WWII. This cartoon rendition of Adolf Hitler was found in a barn in East Yorkshire, England. During the war, the barn was used to house troops and it is thought that the painting was created by a soldier. 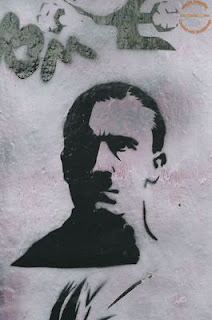 Above: A stencil graffiti piece depicting a young Adolf Hitler, found in Mexico. The dense black shadows used in this piece adds to the idea of evil that is attached to Adolf Hitler. 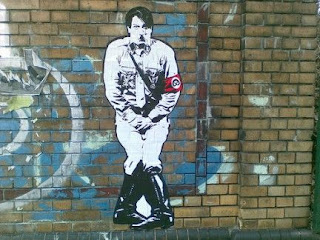 Above: A large street art sticker in Berlin, Germany, shows a desperate Hitler with a full bladder. The swastika emblem has been replaced with another symbol on his armband. Quite a number of these Hitler graffiti stickers have appeared in the area. 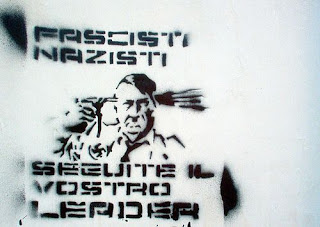 Above: An Italian stencil graffiti piece which shows Hitler shooting himself, surrounded by the words, "Facists and Nazis Follow Your Leader." 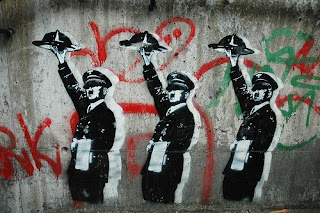 Above: This graffiti stencil in Bergen, Norway, shows Hitler as a waiter. A similar stencil was created by internationally renowned graffiti artist, Banksy, but the creator of the above piece is unknown. 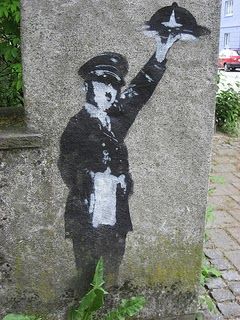 Above: Banksy's graffiti artwork of Hitler as a waiter. 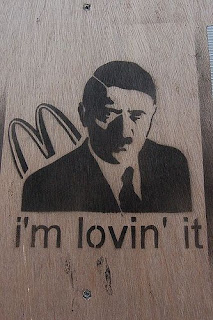 Above: This piece of Hitler Graffiti in Cardiff, England, combines an image of Adolf Hitler with the logo and slogan of the international fast food chain, Mcdonalds. 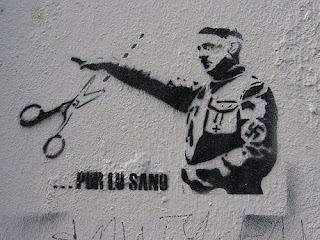 Above: "It takes drastic measures" - a stenciled urban art piece found in Spain. Hitler is shown performing the Nazi Party salute, while a pair of unmanned scissors aims to cut off his hand and therefore disable Hitler. 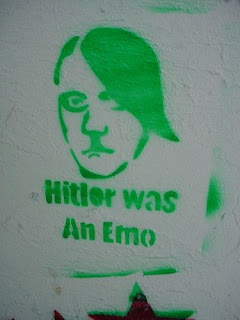 Above: A Mexican artist's sense of humor finds its way into this stencil graffiti artwork. Hitler's hairstyle, with its side parting and long fringe, is reminiscent of the popular emo style that is being worn today. 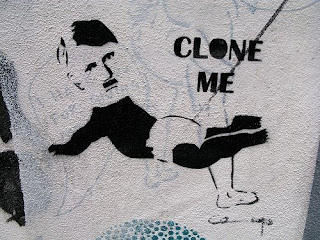 Above: Is there any relation between the baby's black skin and Hitler views on Eugenics (race cleansing)? 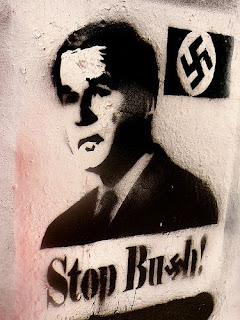 Above: Quite a number of street artists have made connections between George W Bush and Adolf Hitler. In the above graffiti image, Bush doesn't have the trademark Hitler mustache, but two swastikas adorn the picture to insinuate that Bush's actions while president were similar to those of Adolf Hitler during his reign in Europe. 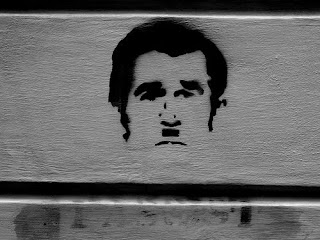 Above: It's not entirely clear if the artist wanted to create a comparison between Bush and Hitler or Bush and Charlie Chaplin, an actor during WWII who had a similar mustache. The piece is slightly whimsical, even pitiful. If it is meant to portray Bush as Hitler, the personality of the piece sets it apart from others in its category as it doesn't exhibit the same 'evil' factor as other Hitler graffiti works. 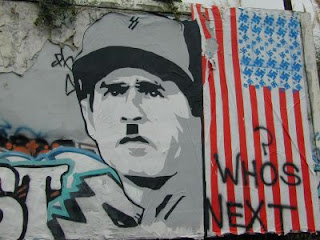 Above: An enormous graffiti sticker in the Netherlands shows a combination of Hitler and George Bush. Swastikas replace the stars on the American flag. More George Bush Graffiti Art 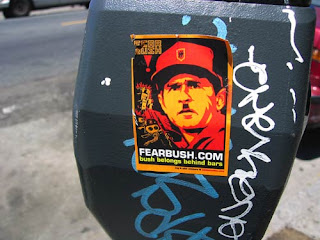 Above: Another Bush / Hitler hybrid image, similar to the one shown above. Bush Hitler is shown wearing a baseball cap with the Nazi SS logo emblazoned on it. The fearbush.com website is no longer available online. 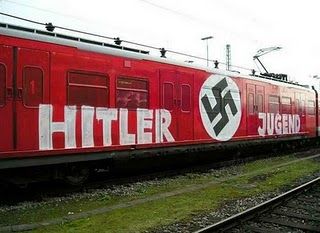 Above: This train (unknown location) has been painted red and decorated with a swastika and the words, "Hitler Youth". The Nazi Youth Party Played a chilling role in the Second World War as children and teenagers were manipulated by mass propaganda to perform acts of violence.


This mid-20th Century Fuhrer and his actions have been memorialized in a number of different ways. Outside the building in Austria where Hitler was born is a stone engraved with the words, "For peace, freedom and democracy. Never again Fascism. Millions of dead remind us." Many books, movies and artworks have been created around Hitler's memory, and it seems that his image will continue to serve as a symbol of war and hate.