Is tattooing an animal inhumane, or is it art? Animal Rights lobbyists exclaim in horror as animals receive decorative tattoos from their owners, claiming that animals can’t choose whether or not to not have the tattoos done. 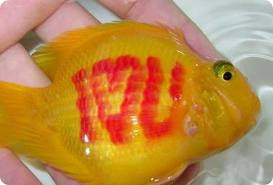 Owners of rare or valuable pets have the option to tag their pets with an identification tattoo. The marking deters theft, and if the pet is found, the code can be traced back to the owner of the animal. The tattoo allows a person to know who the breeder of the animal is and the litter number that the animal came from, which authenticates the lineage of the animal. These tattoos are performed while the animal is under anaesthetic, at a young age. 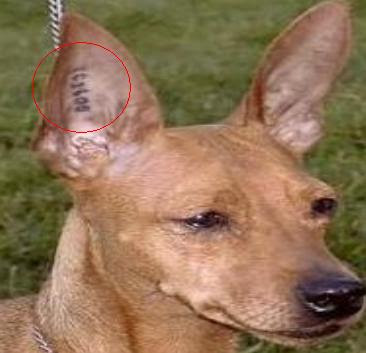 This dog has a Hello Kitty tattoo on its belly, apparently for identification purposes. The dog was tattooed by its owner, while under anesthetic. The actual tattooing process wasn’t particularly cruel, but now this poor pooch must live in Hello Kitty hell, unable to lift its leg in public for fear of other dogs seeing the abominably cutesy cat face. 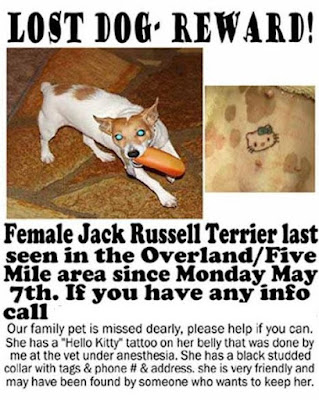 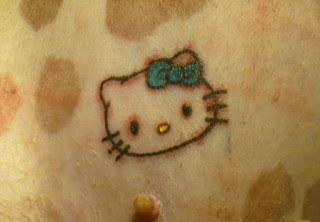 Do fish have feelings? Hopes? Dreams? Would they approve of having hearts, spots and stripes tattooed onto them in garish pinks, greens and blues?
Who knows? Unless we find fish whisperers to talk to the little guys and ask them their opinion; tattooed fish will continue to be a lame fad for tasteless consumers.

Imported from Singapore and Hong Kong, these tattooed mollies are making their way into fish tanks across the globe. The actual process of the inking is unclear. Some say the fish are sucked into a clear tube and then tattooed with a laser, other say the fish are tattooed in the traditional needle and ink method.

Do fish feel pain, or are they just a vegetable that moves? The ink is only scale deep, so it is debatable whether the fish are hurt in any way. 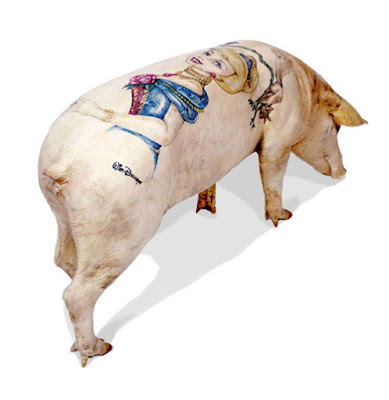 Delvoye says, “I tattoo pigs because they grow fast and they are so much better to tattoo than fish. I tattoo them when they are young and I like the way the artwork stretches and distorts over time. Essentially, we invest in small tattoos and we harvest large paintings.” See full interview here. 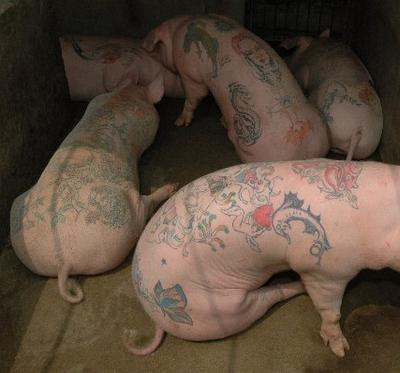 The pigs live a peaceful lifestyle on an art farm in China, free to roam and forage for food. Previously destined for the slaughterhouse, these pigs have a full, happy life ahead of them in return for the tattoos on their skin, which are harvested after their death. The pigs are tattooed whilst sedated, and may not even be aware of their own markings. 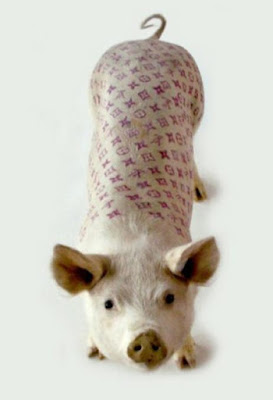 Animal Rights groups wish to stop unnecessary cruelty towards animals. But is it really so cruel to trade a slaughterhouse death for a few tattoos and a tranquil life on a farm?

Although tattooing animals is not a common practice, it has become a fad amongst tasteless fashion mongers. One can only wonder at the fact that there are laws against children being tattooed, yet there are no laws against the tattooing of animals. Should this practice be illegal or not?
More on tattooed animals in Meow! Cats with Tattoos or Tattoos of Cats?