Chess sets are traditionally made up of characters found in a medieval royal court. Cartoon chess pieces still use the traditional labels such as king, queen, knight and pawn, yet the human subjects  have been replaced with the characters of popular cartoons and games.

Cartoon Chess Sets
Traditional chess set designs are based on the opposing colors of black and white, to distinguish each players' pieces and squares. The vibrant cartoon characters allow chess sets to be filled with color and personality, creating an appeal for younger chess players.

Above: Characters from the popular children's TV series, The Smurfs, are the subject of this cartoon chess set. Papa Smurf is the king and Smurfette is the queen. 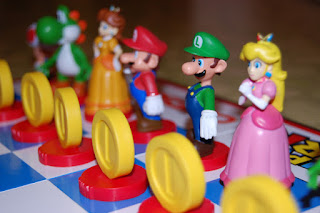 Above: This chess set is based on Nintendo's famous console game, Mario Brothers. Cartoon chess sets are mostly made of plastic, which means that they are more child-friendly than the stone, glass or wood chess sets of the past. 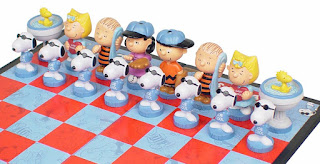 Above: Charlie Brown, Snoopy and friends become playing pieces for this character chess set set based on the cartoon, Peanuts. 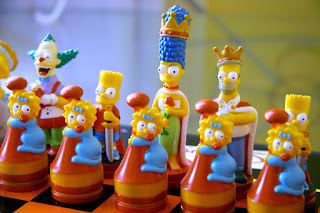 Above: Marge and Homer Simpson play the part of king and queen in this cartoon chess set. 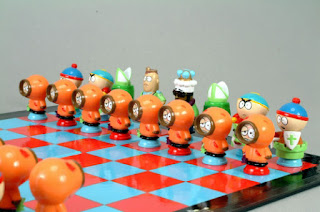 Above: This cartoon chess set boasts characters from the adult cartoon, South Park, with Kenny as the pawn.