Chainsaw Carving is a Chip Off the Old Block

Chainsaw carving combines the ancient art of carving with the modern technology of the chainsaw, commonly used for tree felling. The artist uses the chainsaw to carve a wooden trunk or block, in a performance that is fascinating to watch.

As with most art forms, chainsaw carving has been used to create fan art of popular media characters from films and games. Most of these character statues are carved from several pieces of wood that are fitted together during the carving process.


Carving of Big Daddy from Bioshock
A chainsaw artist, Jason, creates a chainsaw carving of a Big Daddy from the game, Bioshock. The video below shows the process from selecting wood to completing the tiniest detail.


Above: A video of the chainsaw carving process, which shows a chainsaw artist called Jason carving a Bog Daddy character from the popular game, Bioshock. 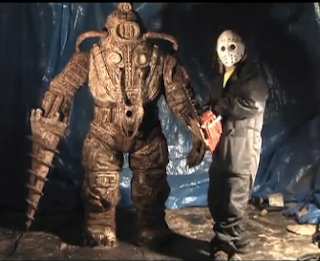 Above: The finished sculpture. The large statue is highly detailed and beautifully finished.

Chainsawed Characters from Star Wars
George Lucas's famous movies, Star Wars, have inspired artists to create fan art of the movies' characters. Chainsaw carving lends itself particularly well to woolly and furry characters such as Chewbacca and the Ewoks. 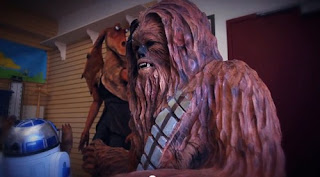 Above: Chewbacca, with Jar Jar Binks. These chainsaw carvings were displayed at an extreme sports event. Apparently the artist won the audience's heart when he cut Jar Jar Binks' head off with a chainsaw. 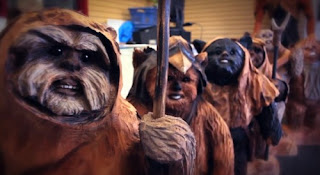 Above: The Ewoks, a furry alien race from the Star Wars films. The artist has painted the wood to give the statues more character.

Lord of the Rings Characters in Chainsaw Art
JRR Tolkien's famous fantasy novel, The Lord of the Rings, has a cast of fascinating and unique characters.  A favorite character from the books and films is Gandalf the wizard, with his long beard and flowing robes, this staff-carrying warrior wizard is highly recognizable, even from afar. 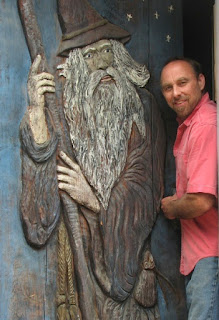 Above: A flat panel chainsaw carving of Gandalf the Grey, from The Lord of the Rings. 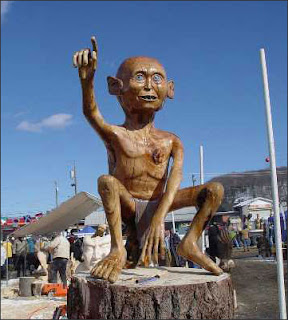 Above: A B-grade depiction of Gollum, mutated hobbit who lives underground and speaks in sibilant riddles. 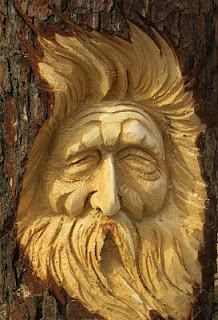 Above: An ent, a tree character, carved into the trunk of a living tree. Ents can move, talk and have a culture of their own.