Absinthe is an alcoholic beverage made from herbs such as anise, fennel and wormwood. The drink is high in alcohol and can cause mild hallucinations, making it a popular recreational drug of the late 19th century.

The Tipsy History of Absinthe
Wormwood was used by the ancient Greeks and Egyptians for use in medicinal tinctures. Over time, other herbs were added to the drink and the distillation process refined until in the 18th century, absinthe was produced. For the next century, absinthe was recommended by doctors as a healing elixir. In the 1840s, French troops were even given absinthe as a malaria preventative. The soldiers returned home with a taste for the aniseed-flavored wine, and the popularity of absinthe spread rapidly throughout France and Europe. 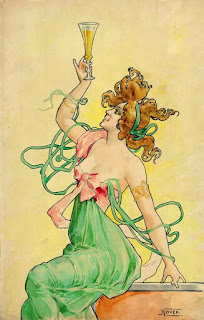 Above: An antique illustration of the green fairy, the personified symbol of absinthe. [source] 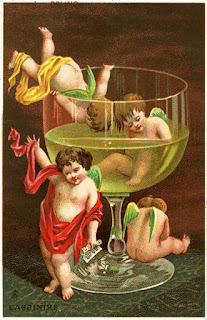 Above: A different take on the green fairy symbol that was introduced in the top illustration. In this postcard painting, four cherubs with green wings are showing the euphoric effects of the drink. 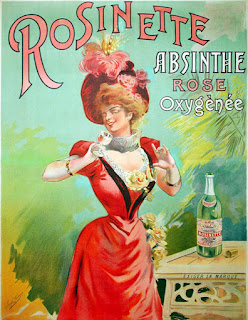 Above: A poster advert for pink absinthe, a drink that was popular with women. [source]

Preparing Absinthe
There are two main preparation methods for absinthe, the French Method and the Bohemian Method. In the French Method, absinthe is poured into a glass, and covered with a strainer. A cube of sugar is placed on top of the strainer, and water poured over the sugar into the glass. The absinthe turns cloudy with the addition of water, resulting in a milky-looking drink.
The Bohemian Method is similar in set up to the French Method, except that fire is used in place of water. Absinthe is poured into a glass, covered with a strainer and a sugar cube placed on top of the strainer. The sugar cube had been pre-soaked in alcohol, often more absinthe. The cube is then set alight and dropped into the absinthe, lighting the alcohol. A shot glass of water is added to douse the flames. Sometimes the flames are allowed to self-extinguish, burning away all of the alcohol, but it is more popular to douse the flames before the alcohol is burned off. 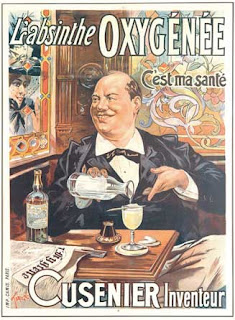 Above: A bourgeois man pours water over a cube of sugar on a decorative strainer. The sugared water mixes with the absinthe in the glass, diluting it and sweetening it. [source]

The Demise of Absinthe
In the early 1900s, absinthe was banned in many countries. It was said that "Absinthe makes you crazy and criminal, [and] provokes epilepsy and tuberculosis". The drink, which had previously been enjoyed by people of all classes, suddenly became unpopular, and it was believed that absinthe drinkers were uncouth louts and layabouts.
In Switzerland, absinthe bans simply forced the absinthe producers to sell their wares on the black market. Underground Swiss distillers created a form of clear absinthe which was easier to hide from the authorities. 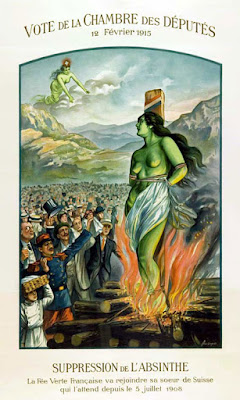 Above: An anti-prohibition poster, condemning the authorities for banning the popular drink. The illustration parodies the burning of witches during the Christian Inquisition. [source] 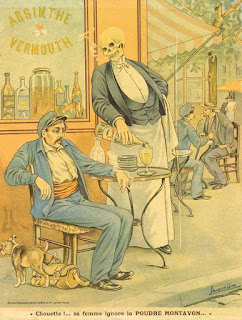 Above: A propaganda poster depicts a skeleton bartender pouring absinthe for a customer. The poster portrays the absinthe drinker as sickly and hopeless. He is such a loser, in fact, that a mongrel dog has deemed his satchel worthy of becoming a urinal. [source] 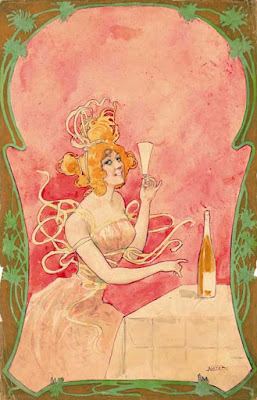 Above: A late 19th century depiction of a woman drinking absinthe. This poster was illustrated during the heyday of absinthe consumption and will remain an eternal reminder of the Victorian-era popularity of this drink. [source]