Albert Einstein was a 20th century theoretical physicist who transformed the world with his theories. Einstein has become a symbol of intelligence,and often finds a place in geek fan art.


The Mad Scientist
With his bold features and wild hair, Einstein's physical appearance has become the model for character designs of mad scientists and geniuses. In the fan art work below, the artist has given Einstein an even wilder appearance by using unconstrained brushstrokes and bright colors. 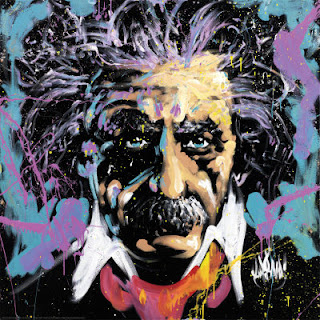 Einstein challenges Science in Art
The collage shown below creates an image of Einstein pulling a tongue. The famous photograph of Einstein blowing a raspberry is a favorite among Einstein fans, because it shows a lighter, more humorous side of the scientist. For the first time in written history, Einstein challenged the precepts that scientists should be serious, stoic men. 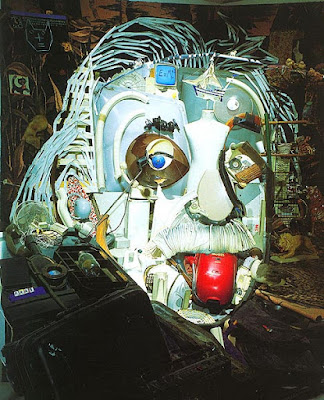 Einstein in Pencil
Albert Einstein's recognizable facial features make him an excellent subject for art works. In the pencil drawing below, Ships and aeroplanes, skulls and birds spill out of Einstein's brain. Perhaps these are symbols of daily life that we know view differently because of Einstein's theories. 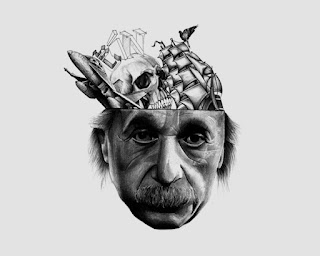 Mad Scientist = Crazy Hair
One of Einstein's most recognizable features is his crazy hair that stood out at all angles, as if trying to tear itself free of the head that held so many theories. In the caricature painting below, the artist has exaggerated Einstein's hair and moustache, to give the theoretical scientist a humorous appearance. 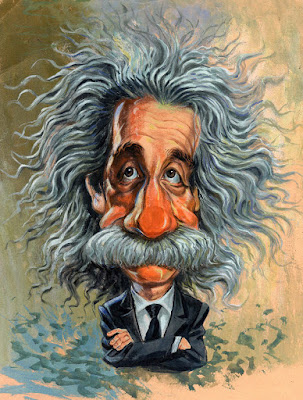 Einstein gets Inked in Tattoo Designs
Because Einstein has become a symbol of science and intelligence, the scientist's portrait has become a popular subject in geek tattoo designs. In the tattoo of Einstein shown below, he is shown with his famous formula, e=mc2. 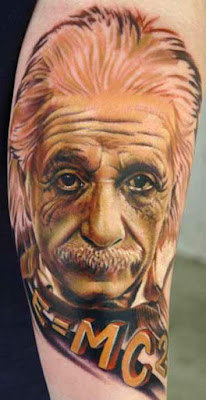 Graffiti puts Einstein on the Streets
Einstein has become a household name, and his face is known to millions around the world. The scientist has found his way into many graffiti art designs, and is often used by graffiti artists to send a powerful message. In the street art below, Einstein holds a sign that reads, "Love is the answer." 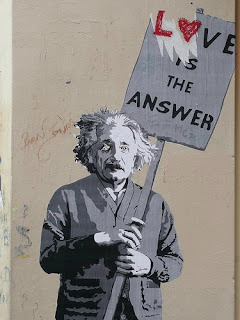