Humorous tattoos using the belly button as part of the mooning character’s anatomy.

Public nudity is considered an offense that in many countries often results in arrest. However, worldwide, there are no bans on the content of tattoos, so nude or rude images often end up as tattoo designs, and can be used to convey a humorous message.

The rebellious Bart Simpson character has been used in a classic mooning pose in this tattoo. Eat my shorts? I think not… 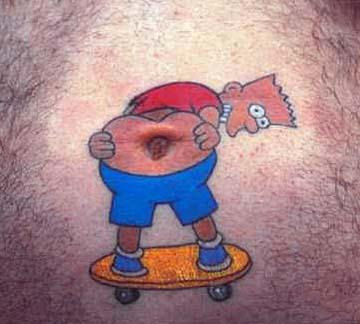 
The tattoos shown here cleverly use the navel as part of the artwork. Positioned elsewhere on the body, these designs probably wouldn’t have been as humorous as they are around the belly button.
Although the skin of the stomach often stretches and ruins tattoos by warping them, tattoo removal is easier and more affective these days, making tummies a viable part of the body for permanent body art. 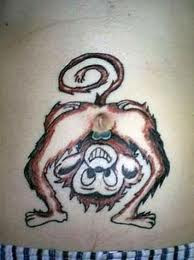 The dark ink around the belly button adds to the gross humor of this image. With our present energy crisis, one can’t help but think about cow fart power when seeing this tattoo. 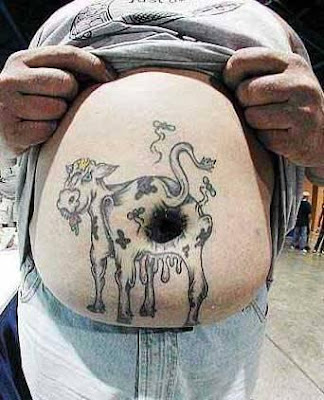 Because of the personal nature of tattoos; the art being a part of a person’s body, governments would be hard pressed to ban nude or rude images in tattoo designs.
Taking away the freedom to choose what a person does to their own body would create public outcry, and therefore these tattoo designs can not be banned, only frowned upon or laughed at. 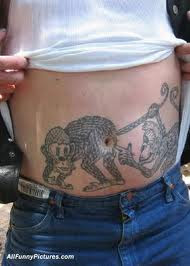