Speed painting is a relatively new term which is used to define the process of creating a finished work of art in a short amount of time, usually for the appreciation of an audience.
Dan Dunn and Denny Dent are other world-renowned speed painters, producing large paintings by hand in just a few minutes. Unlike digital speed painters, traditional speed painters did not use an image reference or a primary sketch in their work. 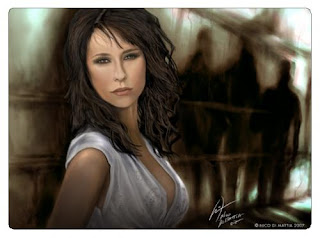 Speed painting is now moving into the digital domain. Artists work in a graphics program such as Adobe Photoshop, and with the aid of screen capture software create a video of the artwork during the production phase. These artists utilize a graphics tablet and stylus that allow the artist more control over their work than of they were to use a computer mouse. The physical motion is similar to that of drawing on paper, with the pen being the stylus and the paper being the tablet that communicates the drawn image to the computer screen.

Argentinean artist Nico di Mattia calls his speed painting style “Arte Fusion”, a combination of digital art and time lapse photography. The photography in this case is a series of screen captures compiled into a video.


Nico di Mattia has enjoyed global recognition for his work as a speed painter, following his first speed painting video in 2007 of John Locke from the series “Lost”. At the time of writing this article, the video had been viewed 5,967,799 times on YouTube.

Di Mattia builds each artwork from scratch, first sketching outlines of the subject from the image reference and then gradually filling in more detail. Watching an artwork grow from a blank page in this way is both impressive and inspiring.

Nico di Mattia’s popular Spiderman speed painting, also posted to YouTube in 2007, has received 5,858,314 views to date.
Digital speed paintings are often based on a pre-existing image which the artist uses for reference during the creative process. Although di Mattia’s artwork retains elements of photo-realism, the use of brush strokes within the finished image is a distinctive signature of the artist. The result is a stunning replica of the original image, boasting realistic highlights, shadows and detail in the creative style of the artist.

In another speed painting work from 2007, di Mattia paints actress Scarlett Johansson, paying special attention to skin tones, pose and detail. With 2,337,073 views, this popular video has inspired and awed many viewers, who enjoy both the skill of the artist, the feeling of interaction with the artwork and the beauty of the artist’s subject.

In traditional paint on canvas works, an artist must paint over areas that they feel need more work. With digital speed painting, graphics programs offer various editing tools for moving, color grading and layering specific areas of the work.

By working in layers, the artist can adjust the color levels, saturation or contrast, and add detail to the chosen area. Shortly after painting Scarlett’s necklace, di Mattia edits the skin below the necklace. A task made easier through the use of layers; the skin is on a separate layer below the necklace and can be edited without affecting the artwork on the necklace.


The early speed paintings of Nico di Mattia were “fan-works”, digital paintings of models, movie stars and famous characters. Included in his recent works are commissioned works for private buyers. Family portraits and personal photos are brought to life in a speed painting video set to the buyer’s choice of music.

YouTube also offers the work of other speed painting artists, who often attribute their work to di Mattia as a response or adulation piece. Digital speed painting videos are growing in popularity and this art form promises exciting and interesting new videos from artists in the years to come.