Bill Watterson’s world famous comic strip characters, Calvin and Hobbes, are a staple in the literary diet of children and adults alike. Calvin, a blonde kid with an over-active imagination, and his stuffed tiger who comes alive in the alternate universe created by Calvin’s mind, have relocated from a life on paper to a new existence on skin, as tattoos. 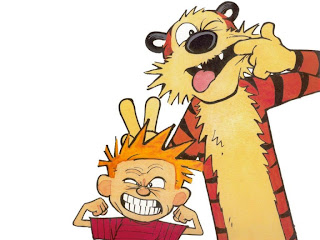 In the early 1980s, Bill Watterson held a job in an advertising company, a position that he didn’t enjoy. Watterson began to explore a talent that he had – cartooning, in the hopes that he could create a new career for himself. His early creations were unsuccessful, with the variety of strips he’d inked being rejected repeatedly by the various syndicates that he sent them to.

However, one strip contained two characters that aroused the interest of the United Press Syndicate. These characters were a young boy, the younger brother of the strip’s main character, and the boy’s stuffed tiger. Watterson created a strip based entirely on these characters and the wonderful world of Calvin and Hobbes was born.

The comic strip became so popular over the years that it has inspired a variety of fan art pieces. The following examples of fan art take the form of tattoo designs based on the Calvin and Hobbes characters and comic strip.


The strip’s protagonist, Calvin, has a number of alter-egos. Spaceman Spiff is an “interplanetary explorer extraordinaire” who is often chased, shot down and captured by predatory alien beasties. Spaceman Spiff wears goggles, the frames of which change shape according to Spiff’s emotions, and Spiff’s futuristic weapon changes names and purposes according to Spiff’s whims. His weapon is sometimes known as the Death Ray Blaster, Atom Blaster or the Atomic Napalm Neutralizer.

The story of Calvin and Hobbes is that of an infallible friendship. They fight, they hug, they laugh and they dance. The relationship between Watterson’s famous characters is both touching and entertaining, as the inseparable duo explore and celebrate the world of Calvin’s imagination.

When drawing a comic strip for a newspaper, cartoonists will often try to fill every inch of space, as it is the space on a newspaper page that costs money. Watterson, however, leaves an enormous amount of space blank in his comic strips to introduce the introspective mood of Calvin. These comic strips, with their elegant simplicity and sense of space, make great line tattoos.

Bill Watterson’s famous comic strip, Calvin and Hobbes, still delights readers more than 20 years after its conception. The comic depicts both the joys and trials of youth, with the unique flavor of Calvin’s active imagination and curious, intelligent mind.