Paintings of Tattoos Reveal Life beneath the Art

Shawn Barber is a tattoo artist at Memoir Tattoos in Los Angeles, California. This American artist has taken the world of body art to a new level, documenting contemporary tattoo culture in his tattoo portraits.

Combining Fine Art and Tattoo Designs
Barber's work is a combination of styles and ideas. He incorporates realistic proportions and colors to convey the humanity of his subject, while creating a feeling of contrast by finishing the painting with loose, flowing brushstrokes and dripping paint. The art of Shawn Barber is a visually delightful mix of control and freedom, detailed realism and expressive abstraction. 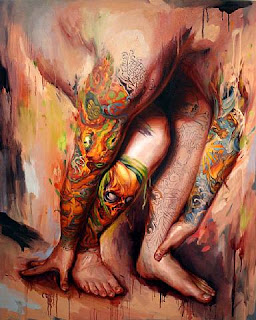 Above: By using flesh tones for both the human subject and background of this painting, Barber creates a solid base for the colorful tattoo designs on the body. The artist has used tight lines to create the tattoo designs, and loose, abstract applications of color for non-essential areas such as the background. [source] 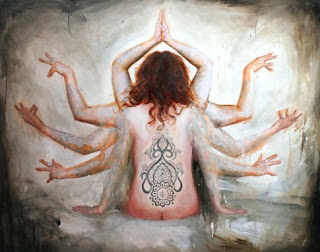 Above: This tattoo portrait parodies the famous Asian image of a figure with a thousand arms. The artist has used the lines of the arms to draw the viewer's attention to the tattoo on the woman's back; the centerpiece of this painting. [source] 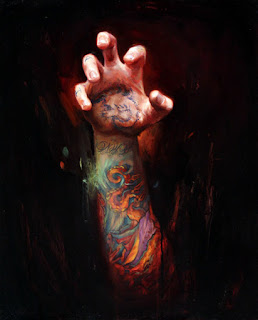 Above: The dramatic contrast between light and dark areas adds mood to this painting of a tattooed arm. The hand is posed in an expressive manner, adding to the drama of the tattoo portrait. In keeping with his style, Barber has created intricate detail in the focal points of the painting; the tattoo designs and the features of the hand. [source] 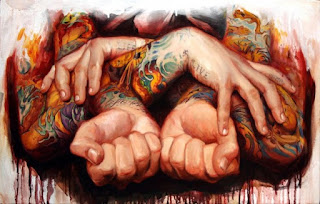 Above: A mosaic of tattooed arms. The flesh of the hands stands out against the busy, colorful canvas of tattooed skin. The visual illusion of this painting is created with the semi-interlocking, semi-converging arms. The body parts are not quite separate, and not quite merged. [source]


A Convergence of Study and Experience
The impact of Barber's art studies is apparent in his work, which expresses a combination of several modern art styles. The influence of abstract art, futurism and surrealism are apparent in his tattoo portraits, and evidence of years of art training can be seen in his beautiful portrayal of the human body. His painting has influenced his tattoos just as much as his tattoo designs have influenced his paintings. 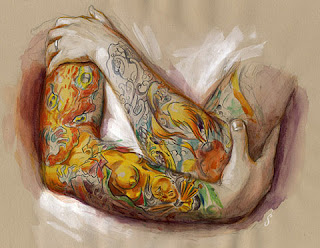 Above: Barber's tattoo paintings often include unfinished tattoo artworks. On the left wrist of the subject in this painting we can see the outlines of an incomplete tattoo. The contrast between colorful tattoos and tattoo outlines adds an extra element of interest to the painting. [source] 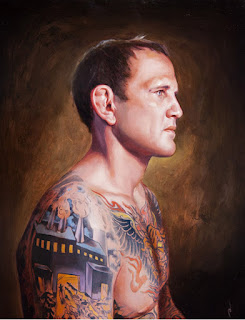 Above: A tattoo portrait that shows not only the body art of the subject, but his face, which reveals more about his personality and attitude towards life than even his chosen tattoos can. [source] 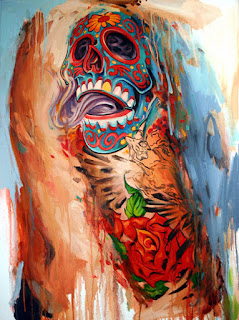 Above: A distinct example of the contrast between the clear, controlled brushstrokes and loose paintwork that Barber uses to create his distinct style. [source] 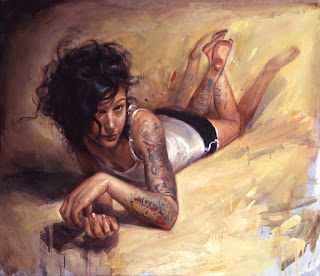 Above: The viewer is given a sense of animation, as if the model is swinging her legs while posing for the portrait. During the early 20th century, a movement of artists who called themselves the futurists began to paint images of people in various stages of animation. The effect was of a person with many arms and legs, similar to the painting above. [source]