Leonardo da Vinci’s Mona Lisa has taken to the streets, appearing in urban graffiti murals around the world.

Da Vinci’s painting of the young woman has raised many questions over the years, such as, “Who was she?” and “What was she smiling about?” The mystery of the painting has inspired many artists duplicate Da Vinci’s masterpiece in many mediums. 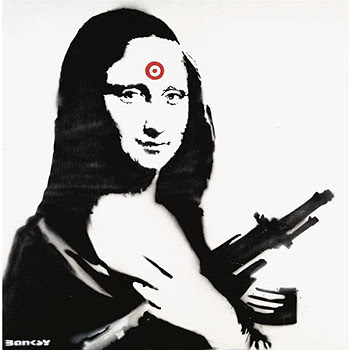 The first picture shown here, a stenciled work depicting Mona in red, with a star on a necklace and a bottle in her hand, appeared in Russia. As with all graffiti, the interpretation of the piece is left up to the viewer. However, the red coloring and the star may be linked to the artist’s views on communism, as these are well-known symbols for the political system. 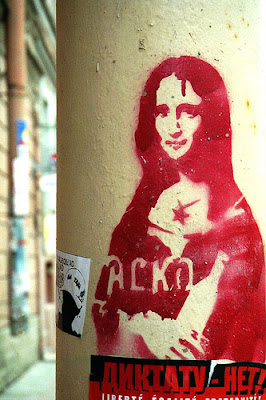 Mona has also appeared on a wall in Portugal, in another stencilled piece. Although the artwork carries no symbolic content, it may have been produced out of appreciation for Da Vinci’s work. 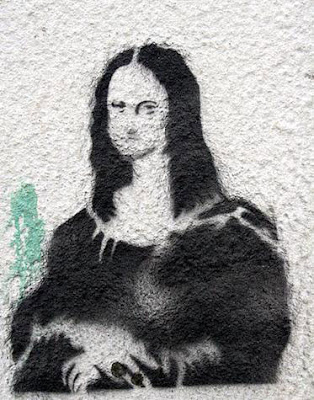 The whereabouts of the following piece is unsure. This graffiti displays two separate styles, and it is thought that the eyes, nose and mouth were painted by a different artist to the one who painted the ears, hair, shoulders and wings. 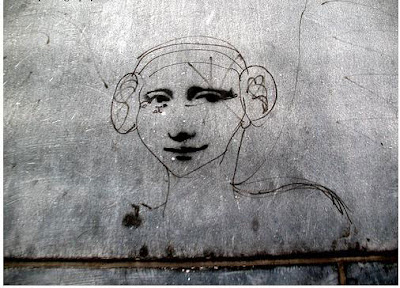 In a controversial piece by Banksy, appearing in England; Mona is depicted bending over and lifting up her skirt. This piece has been considered offensive by some, but as with a lot of graffiti art the artist challenges common public beliefs, in this case, the belief that the Mona Lisa figure is chaste and pure. 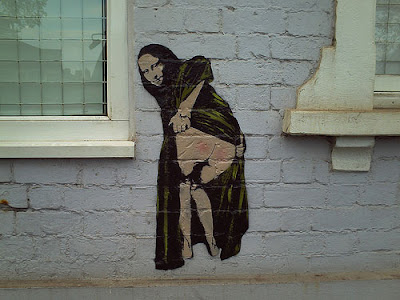 This artwork, in Porto, Portugal, shows Mona in a baseball cap and related attire. Perhaps a symbol of national pride? 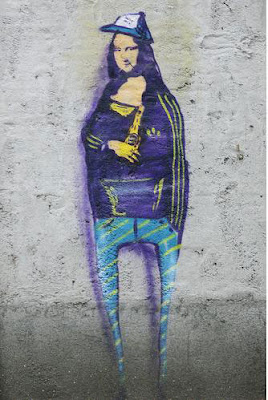 This stencilled piece appeared overnight, in Cardiff, England, before being painted over the next day. The art work takes on several dimensions, as we are presented with a stencilled graffiti art work, depicting a graffiti artist at work, creating a fan art work of the famous painting, the Mona Lisa. 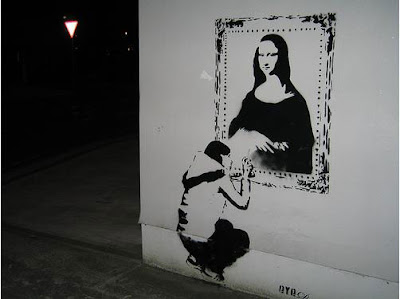 This street art painting of the Mona Lisa, in New York, USA, may not be in existence anymore, as it was created at a construction site, and the area was in the process of being demolished when the photo was taken. 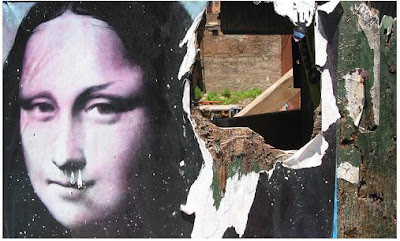 A stenciled artwork, in Bergen, Norway, shows Mona holding a brush and painting over herself. The artist, Dolk, called this piece “The Last Mona”. The motives of this piece are questionable. Is the artist stating that the Mona Lisa as a subject in modern art is no longer creative? Or perhaps that if Mona were alive today, she would not wish to be the focus of so much public scrutiny. The viewer must interpret the work for themselves. 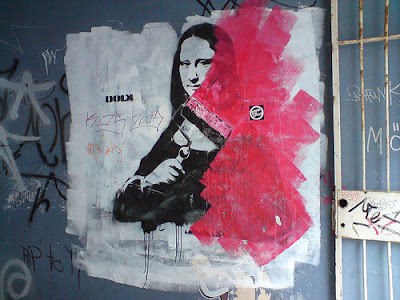 Mona has appeared in London, in what seems to be a politically motivated artwork by the stencil artist Banksy. She is shown wielding a deadly weapon, yet still has her notably mysterious smile. 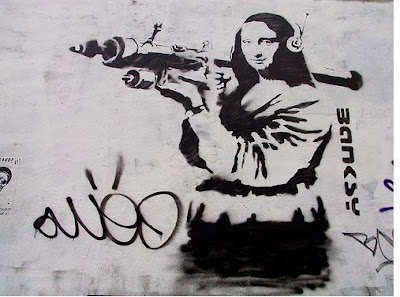 Many paintings gain popularity and then fall from the public eye. Da Vinci’s Mona Lisa has been an inspirational force for many artists, and it seems that she lives on, gaining immortality through the works of others, and always with her mysterious smile. The popularity of her image outlives the lifespan of the artworks in which she is depicted, as they are often destroyed during renovations or painted over.